All of the cleaning started a few days ago - and I guarantee you're not done yet.

I believe I'm going to start with the tree. As much as I enjoy the Christmas tree, it's taking up a prime spot in the living room where the hamster usually resides. (This year he will be joined by the as-yet-not-named gerbil.) Additionally, I think I'm playing with fire - so many shiny objects in reach of the cat. I'm all but begging her to attack it. After the tree comes down, I have to find places for the cookie sheets, baking racks, and other accoutrements of the holiday baking season. Not to mention putting away the new presents. While that's going on, it's important to have seasonal movies playing. You may notice a running theme with most of these films - (OMG I'M STUCK IN THE SNOW AND SOMETHING'S AFTER ME) - but just remember, I'm writing to you from snow-covered Buffalo. Without further ado, please allow me to introduce my WINTER HOLIDAY MOVIES!

This vampire-filled flick is great for the holidays! Vampire havok is not so unlike the bloodletting that occurs when shopping for presents. And even though I get along with my in-laws, not everyone does. Some might even go so far as to say that being trapped in Alaska without sun for 30 days might be an improvement...And while you're at it, remember to skip all the sequels. With or without Melissa George, they're all pretty much crap.

For added viewing pleasure, I suggest that you go heavy on Oreos and hot cocoa. And blankets. Thick ones. No matter where you live or how warm your house is, you'll be instantly cold once you start this movie.

A group of scientists minding their own business and doing research in Antarctica gets tossed into the middle of one of the scariest battles for survival. It all starts when a Norwegian helicopter follows an escaped dog to their camp, all the while trying to kill the canine. In an attempt to figure out why the Norwegians were trying to kill the dog, Kurt Russell heads off to their campsite. What he finds there (and brings back) begins an epic fight for survival, and the fate of every living thing on our planet. As if that's not scary enough, apparently by the time The Thing is discovered, the research team has already pretty much had it with each other. Tensions run high, and blood will boil and crawl!
(Stand-out supporting cast include a bat-shit crazy doctor played by none other than Wilford Brimley, and a nearly-unrecognizable Richard Masur.)

This obscure little gem is perfect for the winter holiday season! An abandoned Colorado silver mine is closed due to a disaster, and it sits vacant for years. It's finally reopened by a small team of four, and all hell breaks loose. People start coming up missing, and nobody can figure out why. As the movie progresses, the Boogens (these creepy monsters who burrow worse than hamsters) become increasingly bold in their kills. They start to come out more into the open. The Boogens aren't totally revealed until almost the end - but it's worth waiting for. Cheesy 80s special effects? Possibly. Creepy as hell? Definitely!

In a nutshell, when the creepy old man with tons of dynamite tells you not to open the abandoned silver mine, you better listen! The Boogens is the tale of what happens when that warning goes unheeded.

Yes, this is a very obvious choice. Zach Galligan receives a Mogwai for Christmas. He (along with spry little Corey Feldman) disobey the cardinal

rules of owning a Mogwai, and baaaad things happen. In case you've forgotten, there are three simple rules: light kills, water is bad, and no food after midnight. Things go well until Galligan begins disobeying the rules. A legion of horrifying gremlins is created from the tiny Mogwai, and they go on a night-long killing spree. Theatres will burn, old ladies will fly, and you'll be left laughing your ass off. As an aside, this movie scared the shit out of me as a child! The images of them hanging willy-nilly from strings of lights and giggling their way through the streets was too much to take. Then again, I was a child in the 80s, so that might have had something to do with it.

Good. Lord. The movie is off to a terrifying start, with a group of Nazi zombies chasing a girl through the snowy mountains of Norway. Obviously, they get her because she's just a vehicle for the zombie reveal (she is dating one of the students that arrives at the cabin, but it's still a minor plot point). The main course is seven students vacationing at a remote cabin during Easter break. They intend to have a break filled with alcohol, sex, and skiing. What they get is the fight of their young lives. If you're a movie buff, watch out for hommages to both Peter Jackson's Dead Alive and Sam Raimi's Evil Dead 2.  The zombies are supposed to hearken to draug, creatures from ancient Norse mythology. Draug are dead beings that viciously guard graves in the same way that Pharaohs were buried with guards. The guards kept watch of the treasure of the person buried in the grave. That explains the box of gold that appears in the movie, but I can't tell you more because it would spoil the plot too much!

Don't hate. Seriously. I get lots of grief for liking this movie! This movie is pretty good! I mean, how can you hate a Stephen King adaptation that boasts Morgan Freeman, Thomas Jane, Jason Lee, 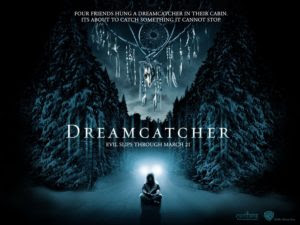 Timothy Olyphant, Tom Sizemore, and Donnie Wahlberg as its cast?! Our main characters are four friends who reunite in Maine for a much-needed hunting trip. Each friend is experiencing different issues in their life. One is moving closer to suicide, one has premonitions, one is having love trouble, and the last is battling alcoholism.  At first it's all fun and games, until they are stuck in a blizzard. Then, a stranger wanders into their camp, seemlingly lost in the blizzard. He takes shelter in their camp, and he tells them of strange lights in the sky. The situation deteriorates further, until the friends are pitted against an alien race trying to take over our world. Their only saving grace might be an incident and friendship from their boyhood days, and their close bond.