January 13, 2014
Next week Chris and I will be heading to a neighboring town for a weekend of geekery. We are attending something called MassiveLAN - which is basically up to 300 gamers in a convention center gaming as hard as they 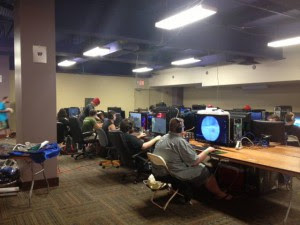 can with no sleep and questionable shower breaks. LAN stands for Local Area Network - basically we're all hooked up together and we're all in the same space. Eventually LAN parties will become a thing of the past, mostly because gaming computers for the serious can be huuuge, annoying and dangerous to move, and with high speed Internet, it's almost nuts to leave the comfort of your own home. For those of us who still go, it's nice to get together and game with new people who you can then talk to in person. This particular LAN party also features games like office chair races, computer building competitions, and other like-minded fun. (Trivia for those of you that don't know - Chris and I originally met at a LAN party.) To give you an idea, here is a shot of the fall MassiveLAN. This is just a tiny corner of the building that we occupied. As you can probably see, everyone's got a neat computer setup, and most opt for their own office chair since sitting on the plastic ones for a whole weekend will most likely lead to certain ass pain and possible premature death. Since the LAN is coming up, I figured I would write some posts about different games out there - and this is my first.

At the fall MassiveLAN, Chris introduced me to this batshit crazy game called Surgeon Simulator. This game has to be the funniest and most morose game on the market. It works like a first-person shooter. All you see are your hands, and whatever is in front of you. Your left hand uses the keyboard to operate the left hand. Your right hand uses the mouse, and it operates the right hand. It sounds ridiculously simple. Left. Right. Left. Right. How bad can it be? The answer is insanely bad. It's extremely hard to keep your hands steady, and to operate them separately - so for those of you who play FPS games, be thankful that when you go to shoot someone both your hands work in unison and know what to do! Instead of levels, you are tasked with every increasingly hard surgeries. Which in and of itself sounds good, but in practice it's pretty much the biggest joke possible. My first try, I sent a coffee cup careening into the open chest cavity of my patient, and then when I went to retrieve it, I found a bonesaw in my hands (I think I hit some wrong buttons on my way to the chest cavity). I proceeded to hack away at the chest cavity with the bonesaw, all the while the patient's blood pressure and vitals were plummeting. In the end, I neither retrieved the coffee cup, nor did I do anything more than destroy my patient.

After such a crushing loss, I did what any person given digital hands would do. I started making gestures. The finger, the peace sign, anything that came to mind. As it turns out, that was almost harder to do than operate! In the screenshot to the left, you can see all kinds of stuff on the table next to the patient. Who on Earth would operate with that much shit just laying around?! It's no wonder I was dropping pens and pencils and all kinds of stuff into the chest cavity. It's actually something of a wonder that my poor patient didn't expire sooner. As for the progression of surgeries - I can only dream. I'm pretty sure I'm never going to have it together enough to actually make any

kind of progress whatsoever. While searching Google for a screenshot worth posting, I came across the screenshot at the right - the brain surgery. I can't even imagine attempting.

Surgeon Simulator is also wildly entertaining in a group setting. A few weeks after MassiveLAN, Chris and I had some friends over at the house. As often happens, everyone drifted to the computers and we fired up a game. Apparently there's no such thing as natural talent in Surgeon Simulator. One of my friends, Steve (of Monster Movie Monday), has really steady hands because he plays keyboard/piano. There's technically no reason that he wouldn't be able to own in this game. Except that the fictional surgeon that you are stuck piloting seems perpetually drunk. Move the mouse just a tiny amount and the right hand goes soaring across the screen, wreaking havoc where it goes.

If you're not afraid to get down and bloody, give Surgeon Simulator a try! If you have happened to try it, drop a line in the comments and tell me what you thought!