The First Haunt of the Year...

October 15, 2013
Nine years ago, I met one of my closest friends, Steve, through the Astronomy Club at my college. He was an alumnus, and I was a current student. While on a camping trip, we discovered our mutual love for all things horror: movies, music, and most of all - haunts. We decided to start going haunting every October - during which we would visit every haunted attraction in our area. (That may seem like nothing much, but here in Western New York, there's a large variety of things to do and see during Fall!) This came to the relief of our other friend, also named Steve, who was pretty much done with haunting. As our tradition is nearing it's 10th year, we decided to start spicing things up by adding an out of town haunt per season. You see, we are in a great location in New York state, since we have attractions like the Haunted Horseman Hayride in the Hudson Valley, and we're extremely close to both Pennsylvania and Canada.

Steve has been talking about Pittsburgh Scarehouse for the last few years. This year, we decided to go, since we'd be closer to Pennsylvania for our bi- 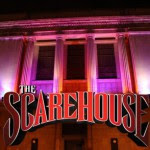 annual Astronomy Camp weekend. We left camp Sunday night, and within three hours were sitting in a Chinese restaurant in Pittsburgh waiting for our arrival time. The Scarehouse organizers came up with a really great way to field their traffic without jamming the narrow street in front of the Scarehouse, and jamming the neighboring streets. Visitors can only arrive via school bus shuttle, which leaves from the Pittsburgh zoo parking lot. When you buy tickets, they come in time slots, starting at 7:00, and going every half hour. The staff  is very efficient at getting people lined up, loaded, and off to the attraction. The bus ride takes less than 10 minutes, but when we arrived, we were thankful that we didn't have to drive. It would have been awful! The Scarehouse is tucked away on the outskirts of a residential area, and the streets are narrow. The jam would have been colossal!

After leaving the shuttle, visitors walk around the building to a back entrance. While they wait in line, they are entertained by a man dressed as a woman, a man in a straightjacket, and a man in a bunny suit. Don't start laughing yet. Bunny-man carries an axe, straight-jacket man pops up when you least expect it, and the last guy, well, he just taunts the crowd and draws your attention away so the others can get to you easier. The front of the building looks like something out of a Vincent Price film, which adds effortlessly to the atmosphere. You just know you're in for it when you enter the building!

I elected not to purchase the speed pass when I purchased the tickets, because I was against the $34.99 price tag. If I'm spending that amount, I want more than a chance to be a line-skipper. In any event, we paid the standard $19.99, waited in line for a half an hour, and then were led in. (The line inside the building is a little claustrophobic, but at least there's a barker for entertainment and some interesting displays). Visitors were led into the Scarehouse in groups of four, though the groups quickly caught up with one another. Within a few moments of entering, the groups had become a conga-line of terrified lambs. One house bleeds into another, and all you can hear are sound effects and people screaming and shrieking. 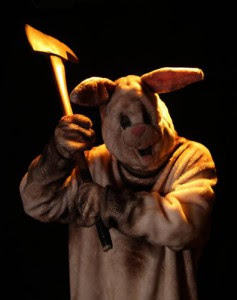 Scarehouse definitely lived up to the hype! Visitors went from house to interconnected house, encountering all sorts of nasty costumes and props. This year's haunts were Creepo's Christmas in 3-D, Pittsburgh Zombies, and The Foresaken. All were phenomenal! Below are brief descriptions of each house, as well as the lobby, but not in the order in which the visitor encounters them. Not afraid of Mister Bunny (pictured at left)? Meet him in person. It's terrifying!

At the end of the haunt, visitors can either purchase merchandise, line up for The Basement, or take a shuttle back to the parking lot. We opted for the parking lot. Pittsburgh Scarehouse was a great attraction, but I recommend that any potential visitors spend $19.99 on the ticket, arrive early, and make sure they're at the parking lot about an hour before their time slot. The attraction is great, but it's better if you can get in, get scared, and get out like Steve and I.

Have you ever been to The Scarehouse? What did you think? Be sure to leave your thoughts in the comments below!