A Slice of My Childhood

October 15, 2013
Tonight I wound up at Walmart, which in and of itself, is nothing exciting. There are many days when I am in Walmart at least once, and sometimes multiple occasions if I forget something. My mission tonight was to turn my change into money, return bottles for money, and purchase margarine so that I could make Krusteaz pumpkin bars. The last didn't happen, mostly because I decided to bake them later, possibly tomorrow. (I truly hate baking sometimes!) 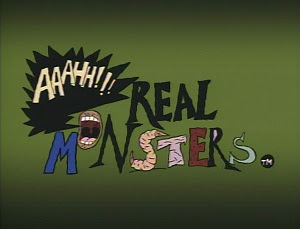 After completing the majority of my mission, I took a detour through the electronics section. Mostly, I wanted to see what movies were for sale, and plan any forthcoming purchases for Thursday, when I get my paycheck from work. Suffice to say, the only thing of interest was Pacific Rim (can it - I liked that movie!) and a little gem from my childhood. Usually I don' t purchase series, since Netflix and Hulu are extremely good at covering what I watch. However, tonight there was a lone copy of AAAHH!!! REAL MONSTERS, which I watched with rapt attention as a child. It was $19.99, but I couldn't argue since it was all 52 episodes on 4 discs. I grabbed my copy, paid for my other merchandise, and got out of Dodge. For those of you not lucky enough to watch the show during it's original run (from October 30, 1994 to December 7, 1997), I highly suggest you get a copy of the series. This show was part of my own personal Golden Age of Nickelodeon, which varies greatly based on when you grew up. My shows were AAAHH!!! REAL MONSTERS, Doug, Rugrats, and Rocko's Modern Life, if you were wondering. Yes, Ren & Stimpy fits in there technically, but the show scared me out of my wits, so I don't list it as something I watched with any sort of regularity.

From top to bottom, the monsters are Oblina, Ickis, and Krumm. As a youngling, I watched this show on Nickelodeon. Each episode has the same basic format - the three monster students get themselves into a pickle while trying to complete assignments for their monster

academy classes. They rely on their own talents, as well as their friendship, to get them through. When I was a child, Ickis was my favorite character, mostly because he was the least scary. He was also the most normal, if any of them could be so termed. Oblina was the most scary, and I'm not sure if it was her eyes, or her pseudo-psycho approach to solving problems. I regarded poor Krumm as the smelly monster who spent the majority of the episodes tossing his eyeballs around, and as a comic relief. Reading up on the Wikipedia entry, I also see that Oblina was able to make children have nightmares by tickling their brains through their ears. No wonder she made me nervous!

I have yet to actually start watching, since I have been itching to see Alien for the last week or so. I'm hoping to start on the series tomorrow afternoon, after Chris and I get back from the local science museum. They're hosting an Aliens and Androids exhibit that features Tony Stark, Alien (from the movie I'm watching right now), and other favorites from the sci-fi world. I'm taking him on a date as part of his birthday present.