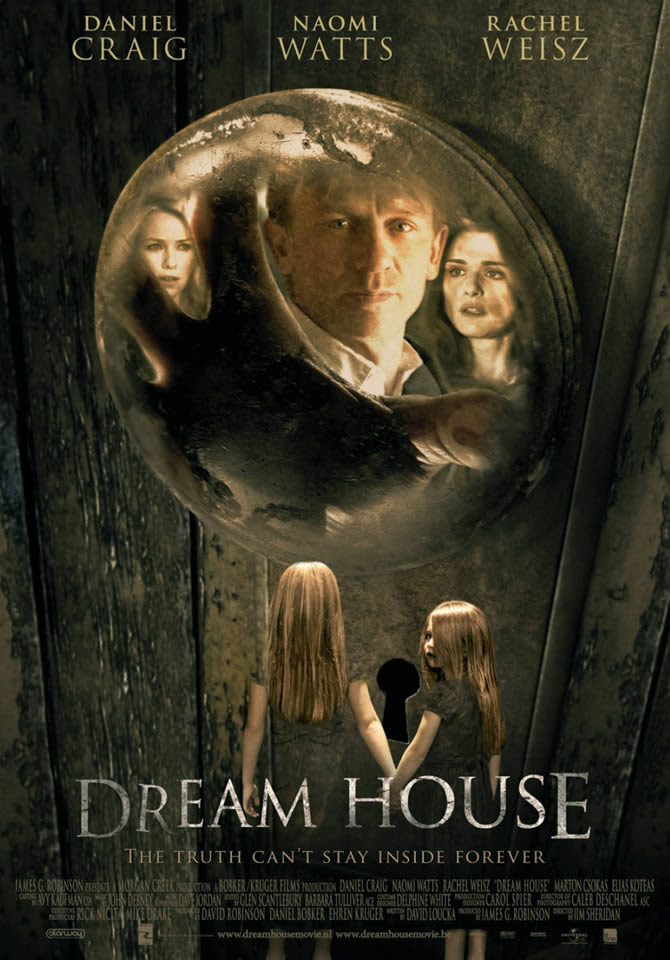 Saturday night Chris and I went to have dinner at my parent's house. My father had been taking almost nonstop about themovie Dream House, which neither Chris nor I had seen. I didn't remember much about it, except that it starred Daniel Craig and Rachel Weisz, both of whom I enjoy watching immensely. Naomi Watts also stars, and just like Rachel, she's pretty much fabulous in any movie she makes.

My apologies in advance, because this post will be excruciatingly short. There is no way to go in depth about what makes this movie great, without completely giving away the ending - or information pertinent to figuring out the ending. Trust me - you'll want to be surprised!

The movie begins with Daniel Craig and Rachel Weisz playing a happily married couple, with two have two lovely daughters. As they settle into their new home, strange things begin to happen. The children begin to see a man outside the house, who only stands under the tree at the edge of the property and stares at them. At first, their parents think that the girls are imagining things, but then they begin to see footprints in the snow. Over the course of the movie, an unforgettable mystery unfolds, leaving the family at once devastated and whole.

I can't say enough about this movie. The acting is top-notch, including the two little girls who are sisters in real life. There was never a point in the movie where anyone was out of character. Additionally, there were so many layers to explore within the storyline that I constantly kept changing my predictions for how the movie would progress. From the mysterious neighbor (Watts) and her dysfunctional ex-husband all the way to Craig's own children, there are so many characters to explore.  Dream House begins slowly, and it gradually speeds up as Craig gets closer to solving the mystery surrounding his family's home. By the end of the movie, I was so tense and heart-broken, I could hardly watch. The rolling credits found me on the floor with Lily (my parent's Boston Terrier) crying my eyes out. GREAT MOVIE. At all costs - you NEED to see it!
Claire Geare Daniel Craig Dream House Movies and TV Naomi Watts Rachel Weisz Taylor Geare