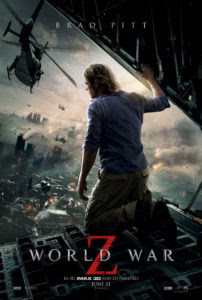 I have been to World War Z, lived to tell the tale...and loved it.

For the past 3 years I have read horror (specifically zombies) to the exclusion of almost anything else (barring food box ingredient lists and one accidental slip where I read The Silver Linings Playbook.  Yeah, I loved that one too.)  The point I'm trying to make is that I had high expectations for this movie because I knew what the genre was capable of, and it payed off.

World War Z is one of the first zombie movies to really be believable.  The movie focuses on a "real disease" that moves from person to person through bites and has a frighteningly short incubation period after which the victims become rabid.  A few months before World War Z came out in theaters, The National Geographic released an article detailing the possibility of a zombie virus.  The article discusses the conditions necessary to create the Rage Virus out of the 28 Days franchise.  Thankfully for all of us, it seems that Nature safeguarded us and we aren't going to experience anything like the movies.  Then again who knows, I just found this new article about a new strain of rabies.

Looking to the natural world again, the filmmakers patterned their zombies after ants and other animals that exhibit pack and herd behavior.  The idea is that the individual becomes less important and the main need is spreading the virus to the next host.  This explains their lack of interest in their own physical pain or well-being.  The article also includes some cool footage of the zombies taking down a chopper.  Speaking of spreading the virus, I was pleased to see that the filmmakers actually made the passing of the virus believable as well.  They tamed the zombie virus, and made it follow real world rules.  According to the American Red Cross (I used to be an instructor for several of their courses), there are rules that viruses and bacteria have to follow in order to infect people.  They are (paraphrased):

1) The virus/bacteria has to be present

2) The host needs to be susceptible (i.e. no immunity OR the right kind of host)

3) The virus/bacteria has to have the right entry method (i.e. bite, scrape, injection, airborne) 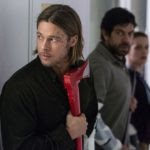 Without giving away a spoiler, there is a scene where Brad Pitt comes into contact with the blood, and I was positive he was infected.  (The picture to the left is not from that scene - it's from another part of the movie.)  I was surprised and confused when he didn't contract the disease.  However, I saw later on that the filmmakers had stayed true to their rule regarding infection when another character was most likely going to be infected in a similar manner.  Similarly, the "camouflage" that seems to be drawing the ire of the Internet community was actually a really great idea.  Within context of the rules of the disease that the movie sets down, it makes perfect sense.  Just refer to the American Red Cross rules - it's number 2.  Susceptibility due to being the right kind of host.  Trust me, when you see the movie it will make sense.  Also trust me when I say that if you haven't found the spoiler on the Internet, don't go looking for it.  The idea of the "camouflage" is the driving force of the last third of the movie, and the resolution of the movie.

For those that don't believe that this movie is in the spirit of Max Brooks' iconic book (including the author himself), put aside your prejudice.  Any attempts to be true to the book would require a Game of Thrones-sized undertaking with a huge budget.  When you strip away the expectations of the book, the movie is actually really good.  In fact, it's the scariest zombie film I've ever seen.  Zombies rise as cities fall in this PG-13 thriller.  Worried there won't be enough blood?  Don't be - there's enough suspense to more than make up for the PG rating.  The CGI zombie sequences and makeup are all top notch, and the acting isn't half bad either.  Big name Brad Pitt manages to fade into the story, instead of sticking out like a multi-million dollar sore thumb.