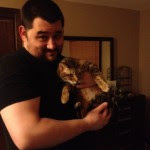 Tonight I'm sitting in the basement with my husband Chris (pictured left), our friend Brian (graphic designer extraordinaire), and Chloe (The Overlord - also pictured left).  When I got home from work, Chris told me that he had gotten his pre-order copy of Evil Dead from iTunes, and that he and Brian wanted to watch it.  I promised the night that I wrote the first review, that I would write a second review when I saw it again.

So, here we are, watching this gory-as-a-slaughterhouse film, and I'm once again wondering why I do this to myself.  To be fair, I like the movie more than the first time I saw it.  However, the massive gore and body horror hasn't become any less shocking.  To say that this movie lives up to a second watching is an understatement.  I'm also second-guessing my decision to eat food before sitting down to this.  I knew better.  I knew what was coming.  I absolutely HATE this kind of movie.  I can't deal with the gore and self-mutiliation.  Then why am I doing this?  That's a great question.  I promised when I wrote the first review that I would revisit the movie, and I like to keep my promises. 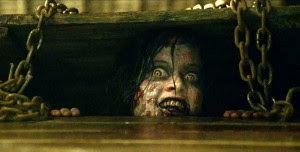 In my last review of this movie (read it here), I tore it apart for not having enough elements in it from the original movie.  Knowing what is going to happen next has given me the advantage of being able to watch for specific original movie tie-ins.  I'm starting to see all the allusions to the first film (any any I miss from Army of Darkness are gleefully pointed out by Chris as we watch).  There are so many!  The changes that were made enhance the movie experience.  During this second viewing, I enjoyed the peeks at the Book (faceless, but still made of skin, and covered in barbed wire and plastic) and watching the steps of possession that the characters experience.  The filmmakers certainly upped the ante!  For the sake of not spoiling the film for anyone, let's just say that the possession and mutilation scenes leave nothing to the imagination.  Each one seems to be worse than the last in terms of being horrifying and unbearable.  Characters get up close and personal with electric kitchen knives, glass, needles, and toilets.

While the first viewing of the Evil Dead remake left me underwhelmed, the second viewing got me thinking.  I believe it to be a faithful remake, maintaining key elements of the first film, but also adding amazing makeup effects and changing the plot enough to distinguish itself from the Raimi version.  However, this knowledge in no way makes it easier for me to watch this film again.  I respect the special effects, the amazing acting, and the superb make-up team, but I won't be watching Evil Dead again without severe coercion from my husband.  The all-out gore is too realistic for me!