Showing posts from June, 2013
Show all

The picture to the left is one of the official posters for the movie World War Z, which I saw this past week with my wonderful husband Chris.  The picture to the right is of the original book, by author Max Brooks.  When this movie was first announced, it caused quite the stir in the horror community.  There were some who thought it would be  a good movie.  The rest of us in the community were worried it wouldn't be a faithful adaptation. I think I was just pissed that Brad Pitt was pushing the project.  I didn't think he had the appropriate reverence to pull it off.  Those of us who feared, feared the bastardization and ruination of one of the most important pieces of zombie literature.  Not many zombie books make the New York Times Bestseller list, but Max Brooks' did, which means it crossed over got noticed.

I was hardcore against this movie.  If you don't believe me, just ask my husband, family, friends, and co-workers how bitterly and incessantly I bitched about it…
Post a Comment
Read more

Who knew Armageddon could be such fun?! 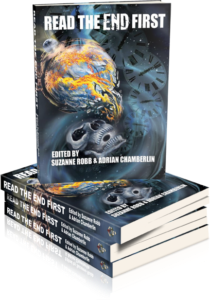 When I first laid eyes on Read the End First, I couldn't wait to read it.  (Seriously - look at that cover!)  I've been a long-time fan of Suzanne Robb's literary antics, and figured that anyone she teamed up with would be top-notch.  After my initial excitement, I started wondering what kinds of stories would be in the anthology.  I couldn't figure out how anyone could come up with 24 separate Apocalypses.  As far as I was concerned, there were limited options:  a) zombies b) disease c) asteroid(s?) d) Biblical.  That's four.  Possibly eight if you can find some variation on the aforementioned methods, but definitely not the 24 (one for each hour) that the book's description boasted.  Nor could I figure out 24 interesting locations from which to destroy the Earth.  Little did I know that the anthology would not only surpass my expectations, but would start an interest in Apocalyptic stories of all sorts!