May 23, 2013
When I used to be a teacher, I would often overhear my students talking about zombies.  They played Left 4 Dead, Red Dead Redemption: Undead Nightmare, and talked 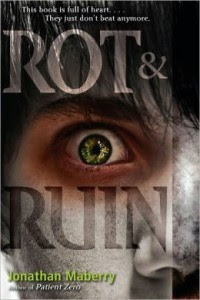 non-stop about what to do in a zombie apocalypse.  (If you were wondering, I taught middle school for three years, which puts my students at about age of 13.)  As an adult, I find that I can read whatever I choose.  My students, on the other hand, need more carefully selected materials.  I remember thinking that it was such a shame that there were no horror books on the reading lists.  That seems to be the one genre that schools avoid, and it's a pity.

Over the course of my last year as a teacher, I befriended one of the parents.  She and I talk about pretty much everything and anything, and I count her among my closest friends.  Her son, my previous student, has the run of my zombie library (with his mom's permission - I let her know if I think there's anything she might object to in the books and she makes the decision).  That being said, I'm always on the lookout for suitable reading material that I will be able to pass along to my own future children so that they can know the joy I feel in reading, and in specific, horror.

There's one book in particular that keeps coming to mind as a suitable entry-level zombie book.  Make no mistake - I read it when I was twice my student's age, and I loved it, so when I say it's appropriate don't make the mistake of thinking it's "tame".  It's very deep, and the characters have to survive a host of growing pains in addition to the struggles of living in a zombie-infested world.  Jonathan Maberry has a way with telling a story about young people in an apocalyptic world that is engaging and realistic.  His story Rot & Ruin, based on one of my all time favorite short stories, centers around two brothers and their tumultuous relationship.  Benny Immura's last memories of his parents cause resentment towards his older brother Tom, whom he views as a coward.  The story centers around the two brothers struggles.  Benny struggles to find his place in the community in the shadow of his brother's achievements (though he's not entirely sure what they are, just that everyone adores his brother), and Tom's struggle to help his brother grow up in a harsh world.

Any way you slice it, this is a great book, and it becomes an even better series.  There are four books total.  I have only read up to the second book, as I want to take my time.  Series like this don't come around often, and I want to make sure the magic lasts just a little bit longer.  If there's a zombie fan of any age in your home or family, pick this book up.  If you're not sure what the big deal is with this whole zombie craze, pick this book up.  You won't be disappointed.
Jonathan Maberry Left 4 Dead Literature Red Dead Redemption Red Dead Redemption: Undead Nightmare Rot amp; Ruin