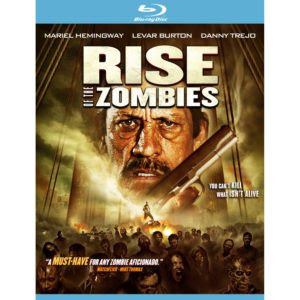 Another night at work, another zombie flick on the screen.  My husband shares his Netflix account with me, and anyone who knows us both can tell which movies were chosen by each of us.  He tends to favor Asian fight flicks and any other action movies, and I can't pull myself away from anything zombie or foreign.  In any event, it's time to thin the queue.

Tonight, I'm watching Rise of the Zombies, which features Danny Trejo on the movie poster.  Shame on Netflix!  I'm almost done with this movie, and I have been able to follow along with it, despite pausing it for calls and half watching while I enter tickets into the computer.  What I'm trying to say is that start power from Danny Trejo, Mariel Hemingway, and LeVar Burton can't save this film.  It's a non-descript zombie shooter that is more like a film adaptation of Left 4 Dead than an actual movie.  Any moments that could possibly be suspenseful or sad are ruined by a soundtrack that has been nothing but overly dramatic the entire time.

The plot for Rise of the Zombies is pretty run-of-the-mill.  People are stranded at Alcatraz while the zombie apocalypse rages outside.  Others are not so lucky - they're still trapped in the city just across the water.  They see on TV that there's a scientist who is working on a cure.  Some people leave the island to go see him, some people leave the island just to go out on their own, and some people stay behind to work on their own kind of research.  There are too many characters and none are developed enough to make them or their names memorable, but they do die in interesting ways.

When I was reading the IMDB.com entry for Rise of the Zombies, I saw that the film was made in 2010, and was a TV film for the SyFy Channel.  That new tidbit actually made me appreciate the film a little more.  You see, as a child, I would watch SyFy all the time with my parents.  They would show reruns of The Twilight Zone, as well as The Outer Limits.  I also used to watch the movies that SyFy produced.  Therefore, I can say with a conscience backed by experience, that this has to be the best film SyFy has come up with on it's own.  They didn't use too much CG, and the makeup was actually pretty good.

All that being said, Rise of the Zombies wasn't the best zombie film out there, but it certainly wasn't the worst.  It's helped greatly by LeVar Burton (Geordi La Forge of Star Trek: Next Generation, Kunta Kinte of Roots, and star of Reading Rainbow) and Danny Trejo (Machete, Predators, and pretty much every movie that requires a bad-ass Latino or Mexican).  Put on Rise of the Zombies if you just want a movie to play in the background while you chat with some friends over pizza at a sleepover, or any time that you want a horror film that you don't have to pay very close attention to while you watch.