May 29, 2013
I don't even know where to begin.  I guess the saying should be, "Fool me once, shame on you.  Fool me twice, shame on me.  Fool me thrice, shame on Netflix."  As mentioned earlier, I'm still working my way through TKout and my Netflix queue, watching the movies that I added that he didn't seem to excited to watch.  I figure it's only fair - it weeds out the movies he won't want to see, and he can weed out the ones I won't want to see.  So far as I can tell, he's getting the better end of the deal.

Tonight began with a little disaster from 2004, titled Zombie Nation.  Again, the poster looks pretty awesome.  It's a 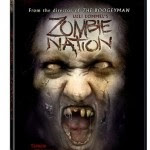 gruesome face with the title carved into it's forehead.  Apparently the production company spent it's entire make-up budget on the poster.  Despite the fact that our femme fatale zombies climb out of the dirt, the only indication we have that they are dead is the heavy black and purple eye makeup.  Raccoons of the world, it's time to be jealous.  Zombie Nation is supposed to be about a psychotic cop who abducts, tortures, and kills women.  Then they come back as zombies.  Pretty simple plot.  However, we get instead is an existential batch of women zombies, who stagger, run, and talk their way through the movie.  Oh, and as a sign of the times, the soundtrack is that deplorable club sound so prevalent in the early part of the 2000s, which gives the whole movie more of a softcore porn feel than an actual zombie movie.  (No offense to any fetish readers out there - if that's your thing, more power to you, but I'd at least like a little warning since that's not exactly my bag of chips.)  Production value is pretty bad, looking more like it was filmed sometime in the 80s.  Not to mention that the set for the inside of the police station looks like the other side of the torture room the cop uses.  All in all, it's a pretty bad movie.  I must confess that I played it through until the end.  I just had to know if it truly was that bad. 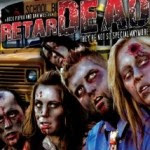 After Zombie Nation, I went to a little flick called RetarDEAD, more out of curiosity than anything else.  Anything zombie draws my attention, and usually without a second thought.  I should have seen it coming a mile away from the title though, and I feel guilty for not giving the title more thought from the get-go.  RetarDEAD started off with a string of home movie quality trailers for obscure movies, which I think was supposed to lead up to the main film.  I barely made it through this lackluster attempt at an artsy opening.  While it was playing, I hopped on over to my staple, IMDB.com to check the film out.  The description in IMDB.com did not match the description in Netflix, or I never would have considered this movie.  Netflix describes it as the tale of a mad scientist who alters students to make them smarter, while cops are more interested in catching a sex fiend than the zombies.  Not the most scintillating plot, but not bad.  IMDB.com however, goes a little more in-depth.  The reason the mad scientist is able to enhance the students is because they are mentally handicapped.  I turned the movie off immediately and rated it with a 1 star.  I don't think that the people involved with the movie must have had any dealings with that particular community.  What few dealings I have had with special needs children (students in my classroom and students that I taught to swim) have taught me that they are loving and wonderful souls.  They are kind and caring, and do not tend to dwell on the skills they don't possess.  When I used to lifeguard, I worked with the Special Olympics swimmers.  All throughout the practice, they cheered each other on and freely gave tips to each other to improve their swimming.  I'm not a holier-than-thou type, and enjoy my share of politically incorrect entertainment, but I can't watch this one.  Having met the people I've met and seen what I've seen, I can't watch this movie.

Now I'm off to the third attempt of the night.  It's a crazy flick titled Deadgirl.  Both the Netflix and IMDB.com descriptions are close, so I think I know what I'm getting into this time.  Look for my review of it, possibly later tonight or tomorrow.
DeadGirl Movies and TV Netflix.com RetarDEAD Zombie Nation