An Anti-Hero for the Ages

May 21, 2013
Eloise J. Knapp delivers a new kind of zombie apocalypse survivor in "The 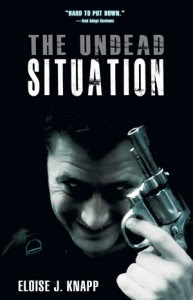 Undead Situation".  Whereas most authors strive to deliver a likeable hero in their books, someone who survives by their wit and their negotiation skills, Knapp brings us someone totally different.  One might say he is the antithesis of Rick Grimes (from The Walking Dead).  Where Grimes is guided by his principals, and propelled to protect those around him, Sinclair isn't burdened by anything other than his need to protect himself.  And his pet ferret, of course.  And the idea that there is a finite amount of candy now available.

Sinclair spends the whole of the book avoiding other people, eating candy, and hanging out with his pet ferret.  It doesn't exactly sound like a compelling read, but trust me, it's worth every penny you'll pay for it - and more.  Knapp is an amazing author.  She takes you right into Sinclair's mind - and what a ride that is!  I never thought I would root so hard for a protagonist who is so obviously unhinged.  Sinclair makes it painfully clear to the reader that he's happy with the new world in which he resides.  He doesn't have to worry about other people bothering him, he doesn't have to share the world's candy supply with anyone else, and he doesn't have to conform to any other societal principles.  That is, until an equally unstable and unusual woman enters his life.  And then another.  Before he knows it, Sinclair is having issues with something he's never given a second though to - morals.

If you're looking for a new take on the apocalypse, you really need to pick up The Undead Situation by Eloise J Knapp.  It's available for Kindle and in paperback, and either choice is sound.  It would also make a great gift for anyone interested in psychology, zombies, candy, or ferrets.  Now, stop reading this review and go get the book!
candy Cyrus V. Sinclair Eloise J. Knapp ferret Literature Rick Grimes sociopath soda sweet tooth The Undead Situation The Walking Dead