Not Your Average Monster

April 19, 2013
I think it's safe to say that author Pat Douglas (book name PA Douglas) has forever ruined me where koala bears are concerned.  It's not that I thought they were super cute to begin with or anything, but after reading "Killer Koalas From Another Dimension", I certainly won't be lining up to see them at my local zoo. 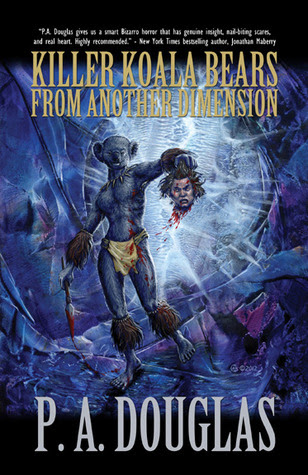 Douglas taps into the bizarre, in the style of Killer Klowns From Outer Space, and takes the reader along for the ride.  Trust me, it takes a talented author to pull off a story about homicidal koalas - and Douglas has that kind of talent!  Not only are his monsters believable, but so are the main characters.  Joana and Tim are a realistic high school couple.  Thank the literary muses that they're neither Bella nor Edward.  They're a normal, immature, slightly dysfunctional couple.  (Well, maybe a little more than that - Tim's an insufferable jerk sometimes.  But let's face it - who hasn't dated someone like that at some point?)  Douglas keeps them right where they need to be - in a high school mindset.

As for the story itself, the night begins with teenagers Joana and Tim in a field.  They're
practicing something called geomancy.  Tim is trying to open portals to other worlds by tossing stones in mystic patterns.  At first he doesn't think anything has happened, so he and Joana leave.  Little do they know that they've just begun the longest night of their lives!  What they unleash are rag-clad, spear-toting, vengeful koalas.  Will they survive, or have they doomed themselves and their town to an untimely and horrific series of deaths?  I suggest you read it and find out.