April 19, 2013
When I first heard that Eric S. Brown had written a book called 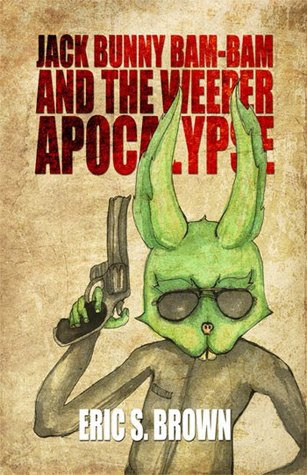 "Jack Bunny Bam-Bam and the Weeper Apocalypse", a few thoughts went through my mind.  I had no idea what the title meant, and couldn't imagine how anyone could possibly take a green rabbit holding a gun seriously, let alone get away with writing that kind of book.  I reluctantly began reading, and I finished it within two days.

Eric S. Brown is an extremely talented author.  He was able to hook me within two pages (though it took far longer for me to admit it myself), and within a chapter I was fully drawn into the world of this strangely addictive bunny-assassin.  I'm not going to tell you what a Weeper is because I don't want to ruin one of the books fun discoveries for you, but I will tell you this:  there's no way in hell I'd like to meet one!  Nor would I be particularly interested in meeting Jack Bunny Bam-Bam, who is a strangely intriguing anti-hero.  While he's not exactly likeable, his frank way of speaking and acting is admirable.  He says what he means, and means what he says.  And when he says someone is going to die, they're most likely at his feet dead already.  Yep - he's that kind of guy!

I will warn you - the ending is extremely frustrating.  The book feels almost too short.  Fear not though, Eric himself has mentioned on his Facebook page that there is a sequel in the making.  I strongly urge you to go out there, get that "Jack Bunny Bam-Bam and the Weeper Apocalypse", and get hooked!
apocalypse assassin bunny Eric S. Brown Jack Bunny Bam-Bam and the Weeper Apocalypse Literature sci-fi science fiction weeper