Shambling Up The Ranks... 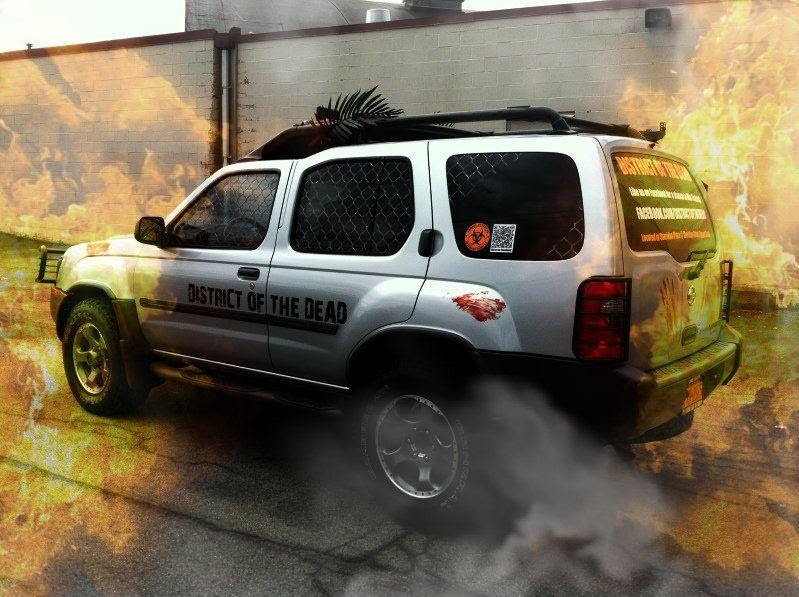 It's the time of year again!  Time to bundle up, grab a hot apple cider, and hit the road to your favorite haunted attraction.  Every year I'm thankful to be living near Buffalo, New York, where there are plenty of haunted houses to visit.  Last year, District of the Dead opened its doors for the inaugural year.  It was a small house, run partly for profit and partly for charity.  I was excited to see what the new year would bring for them, and I certainly wasn't disappointed.

District of the Dead made many smart changes for the 2012 season.  First - they moved to a better location.  They are now at the corner of Sheridan Drive and Eggert Road, near Yings Wings Things & Bar.  This new location is prime - they are at a busy corner and surrounded by well-established businesses.  The second smart change they made was their overall expansion.  There are now two haunted houses:  District of the Dead, and Lake Effect.  While both houses are smaller than most in the area, they are jam-packed with scares!  The actors and actresses are literally laying for you in wait around almost every corner.  The team also used clever distractions and props to divert unsuspecting eyes away from their attackers.

Where District of the Dead really shines is in the pure zest of their workers.  Every blood dripped, drooling, gargling zombie on the property seems genuinely thrilled to be there.  I've been to enough haunted houses - trust me, when the cast and crew aren't into the house, it shows.  Don't be surprised if you're eating next door at the local Mighty Taco and a freak in bandages and bloody drool comes bursting through the door - they're just doing their job.  Scaring you senseless and inserting themselves into your nightmares.

I highly suggest you visit the District of the Dead this year.  The admission is reasonable ($13), the cause is worthy (they support local charities including The Food Bank of WNY), and the scares are plentiful.  Did I mention they also had chainsaws???  I can't wait to see what next year will bring!
Commercial Attractions District of the Dead Haunted Attractions haunted house haunted houses Haunts Lake Effect Mighty Taco New York The Food Bank of WNY zombie zombies