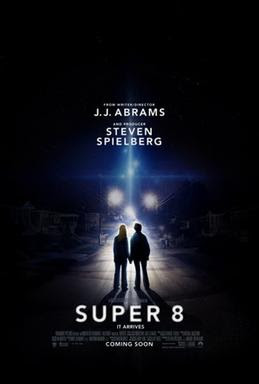 On Easter day, I sat down and watched "Super 8" for the first time.  (If you haven't already guessed, I'm from an atypical family, and we don't always watch sappy movies on the appropriate holiday...)  In any event, the enigmatic trailer combined with a rave review from a class of 5th graders at my previous school caused me to accept the invitation to watch "Super 8".

At first, the movie seemed to go pretty slowly.  I sat there crocheting for most of the first half hour, positive that I wasn't missing anything.  From what I could tell, it was a slightly updated version of "Stand By Me" - a bunch of boys running around doing their thing while the parents don't watch them.  So far, so good.  The fact that the children were using a camera to make a zombie movie added a very nice touch.  Then there was the train crash scene.  I don't think I have ever seen a more terrifying train crash scene in any movie.  I immediately dropped my crochet and watched as tons of metal went flying across the screen, all to the tune of various (glorious) explosions.  Absolute and unabashed awesome.  Arguably one of the best wreck scenes in any horror film I've seen in awhile.  It seemed to last forever, but never get boring.

From the train crash onward, it was hard to look away from the screen.  Each scene got progressively more interesting, and the plot thickened.  The usual suspects were in abundance: freaky military personnel, absentee father, crazed alien.  What was unusual about the movie, was the unexpected twist in the storyline.  "Super 8" gleefully transcends every alien movie you've ever seen, while retaining shades of "E.T." and "Aliens".

I wish I could tell you more about the plot, but I don't want to spoil it for you.  This movie really is THAT good.

While you're watching, you might recognize some familiar names in show biz.  (Fortunately, recognizing them doesn't mean that they'll stick out to you as a particular character to the point of it ruining their current role!)  The project was spearheaded by J.J. Abrams and Steven Spielberg.  You  may remember J.J. Abrams from "Armageddon" and "Lost", and if I have to tell you who Steven Spielberg is, well then you're not fit to be reading this article.  Other familiar faces include Ron Eldard (who played Dodge in "Ghost Ship"), Joel McKinnon Miller ("Men in Black", "Just Like Heaven", and others), Kyle Chandler ("Friday Night Lights", "King Kong" and "Early Edition"), Amanda Michalka (AJ of "Ally and AJ"), and Elle Fanning (little sister to Dakota Fanning).  Whew!

If you're looking for a movie that is out of the ordinary and very entertaining, I highly recommend watching "Super 8".  The movie is well-acted, the plot is interesting, and the train crash is not to be missed.  If you do choose to view "Super 8", make sure you stick around for the credits.  The kid's zombie movie is included as part of the credits - and it's actually pretty good!