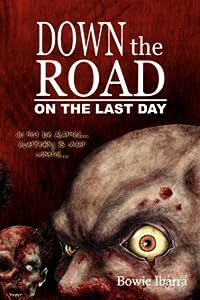 There are multitudinous zombie books on the market.  They fill every shelf, nook, cranny, and niche that exists.  You can bake them, cook them, sew them, crochet them, knit them, take social and business advice from them, wear them, and draw them.  Apparently, there's even a matching pillowcase and bedspread set for your bed replete with reaching zombie hands.  There is a veritable horde of cutesy zombie books for children.  Its plain to see that zombies can be enjoyed by a variety of different people.

It would seem that even the authors are no exception.  Bowie Ibarra, for one, certainly doesn't pass up his chance.  In the second of the Down the Road Trilogy, titled "Down the Road: On the Last Day", he gleefully butchers and terrorizes his way through the book.  I got the distinct impression that he had a hell of a time while writing the book - and that's not an impression I get very often.  I could imagine him sitting at his computer, laughing hysterically at the antics of his characters.

The story is based on a host of characters trying to fend of zombies, which is essentially the story of most zombie novels.  Ibarra adds an extra element of on-going stress by introducing a few United Nations crazies into the mix.  One in particular, is hell-bent on the subjugation of every person he comes across.  Not exactly fitting company for a town full of people who are just trying to survive.  The resulting clash is one of the greatest endings that I have read to date.

If you get this book I promise you three things.  The first is that you should probably be prepared to cry.  Often.  The first chapter sucked me in, and then had me bawling like a baby.  There is also an unconfirmed rumor that the last fifty pages or so may have had me bawling.  Again, unconfirmed.  The second thing you should know about this book is that you will laugh yourself silly.  Ibarra has a knack for knowing when the subject matter gets too heavy.  A little bit of humor goes a long way to letting the reader know that the people in the book are multi-dimensional.  Yes, it's the zombie apocalypse, and yes that sucks.  That doesn't necessarily mean that you can't have a few laughs while you're waiting for your number to be up.  My last promise to you is that you are sure to lose sleep.  Some of the images and scenarios are so disturbing that it was all I could do to lay down and not see them play across the dark of my eyelids.  I'm talking about truly horrific stuff, not just the usual "oh it's a zombie - watch it eating guts" kind of thing.  Ibarra seems to be able to reach into your subconscious, take the most terrifying aspect of the zombie apocalypse, and drag it screaming into the light where it follows you into your dreams.

"Down the Road: On the Last Day" sees the return of characters Alex and Red, who were friends of the central character of "Down the Road".  Alex and Red are back in all their conspiracy-theory glory, and having a great time with a host of new characters.  I'm hard pressed to find a favorite character, because each member of the cast is interesting, unique, and important in their own way.  They have very tangible weaknesses and strengths.  What makes them even more special is the fact that they are relatable.  They suffer our same perils.  They have affairs, get into arguments, fall into irrevocable lust, and learn to forgive.  Each character is so real that I couldn't help but relating them to people I know in my own life.

"Down the Road: On the Last Day" ends just as it should, which doesn't necessarily mean it's fair.  If you're looking for the zombie feel-good book of the year, you should probably look somewhere else.  If on the other hand you're looking for a fast-paced and entertaining read, then you need this book in your hands right this minute!  I liked it so well that before I had even finished, I went over to amazon.com to pick out the next book, "Down the Road: The Fall of Austin".  If pass this by, I guarantee you will regret it!

Don't forget to hop on over to YouTube.com to see the exclusive book trailer for "Down the Road: On the Last Day".