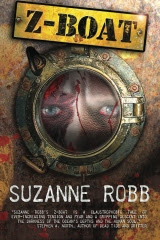 Prepare for the arival of Suzanne Robb, who brings us a new vision of zombie mayhem with her debut novel, "Z-Boat".  It doesn't matter whether your buy the  book in Kindle format or traditional paperback, this is a must-read book.  Especially if you're tired of the tried-and-true formula that the zombie genre has stuck to for so long.  Robb delivers a fast-paced novel full of government and interpersonal intrigue, a submarine too decrepit for it's deep sea rescue mission, and a host of strange characters that is sure to delight.

It's difficult to give a basic summary of such an intricate book, but here goes!  The Betty Loo and her crew have been commissioned to go on a rescue mission deeper than they've ever gone before.  Along with the usual captain and crew, a few new people are assigned.  A quick check of the personnel files shows that these people are anything but ordinary - and that all is not what it seems.  As (bad) luck would have it, the second they leave the dock and begin the mission, everything goes awry in the worst way imaginable - from mechanical failures and dueling spies to accidental crew deaths.  The worst is yet to come - the sub they are going to rescue is crewed by...zombies.  Unfortunately they aren't the shambling Romero variety either.  Robb's zombies retain a little intelligence, and a nightmarish pack mentality.  Do they make it out alive?  Does the plague reach the surface and the unsuspecting world?  Read Z-Boat and find out!

If you haven't read any books by Suzanne Robb, now would be the time.  She's a promising up-and-comer who has already published stories in multiple anthologies.  "Z-Boat" is her first published full-length novel, and there is talk of a sequel.  Her greatest strength as a writer is her ability to weave interesting characters into an even more interesting story line.  She began the book with a Prologue detailing the current state of the world, a first chapter with a not-so-desperate S.O.S. call, and then went straight into the characters and story.  The zombies don't actually appear in full force until the middle of the book, but by then the reader is so deeply immersed in the political intrigue (and, let's face it, trying to guess who's going to make it out alive), they the zombies are an added treat, rather than the main focus.

If you happen to enjoy nitpicking books then I should warn you that there were a few grammatical errors along the way, but nothing worth getting in a tizzy over.  They didn't impact the ability of the reader to enjoy the story.

On a personal note, I found that once I got through the first few pages, I couldn't put the book down.  It drove me crazy trying to figure out who was going to die, where the zombies came from, and how the crew thought they were going to make it back to the surface in a busted sub.  And just to warn any prospective readers, I actually cried at the ending.  It was really sad, but really fit the book.  I think I'd have been really aggravated if the book had a different ending.

Now, stop reading this and go buy a copy of the book for yourself!  (And your friend!)