The End of a Heartbreaking Journey 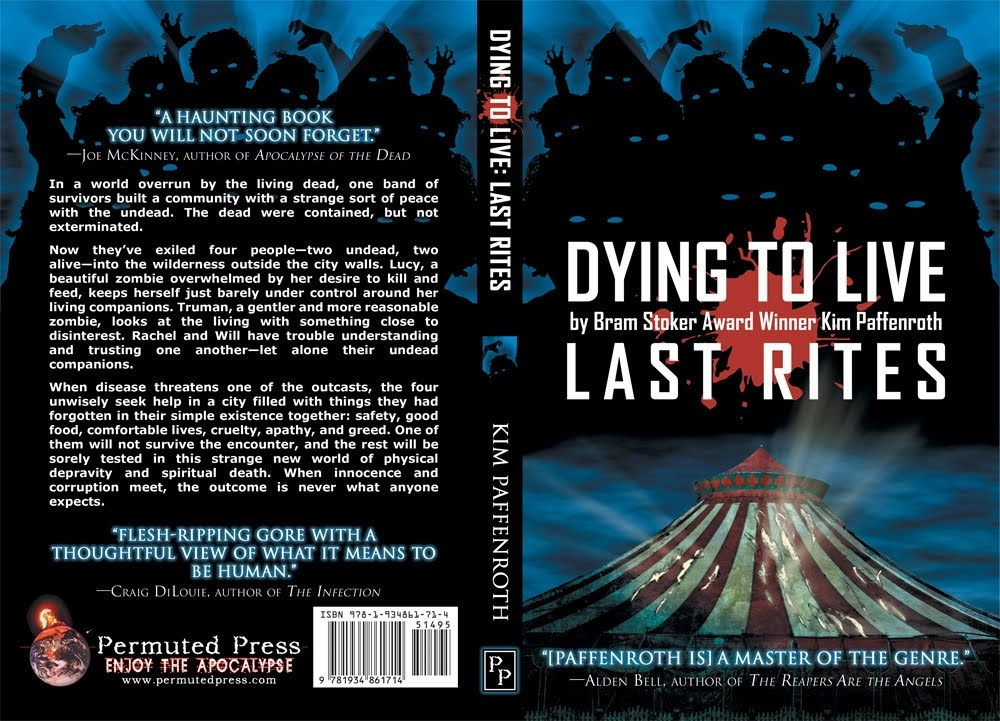 I finished Kim Paffenroth's "Dying to Live: Last Rites" a little while ago, but haven't gotten the opportunity to give it the write-up it so badly deserves.

It was a thought-provoking tear-jerker that left me thinking about the human race, and also introspectively about myself. It made me consider what I myself might be capable of under the right circumstances.  I'd like to think that I would be a good person, but when I think of what I'd do to save the ones I loved, my certainty wavers.  (So don't sit there smugly assuming you'd be any better either...)

If you've read the two previous books in the series, you have already been introduced to the four central characters.  Rachel and Will, two humans who are forced to leave their community because of their treatment of Lucy and Truman, two sentient zombies.  The community they were living in doesn't believe in executing zombies, but they don't believe in coexisting in the same house either.  In any event, the last installation of the trilogy finds the four companions on a boat, with Rachel seriously ill.  Will, Truman, and Lucy decide to seek medical help from a town they find.  What happens to each and every one of them will test the boundaries of what most readers think humans are capable of.  You will find yourself sickened, pensive, and deeply heartbroken by the end of this novel, I guarantee it.  And then you'll feel lost knowing that at this time Paffenroth has not announced any other additions to the series.

Probably the single greatest strength of this work is Paffenroth's ability to create new and complex characters that work seamlessly with his well-established characters while at the same time never losing sight of the importance of the message. While many messages can be found in the book, I choose to take away the idea that a life built on greed and egotism leads to nothing. Conversely, a life built on sharing, self-sacrifice, loyalty and love may not always give you what you expect, but it will be more fulfilling. The best part? Paffenroth isn't preachy about it. He sneaks up on you, his you over the head, and runs off into the darkness while you are left with a serious bump on your head and the echos of his laughter.
Dying to Live Dying to Live: A Novel of Life Among the Undead Dying to Live: Last Rites Dying to Live: Life Sentence Kim Paffenroth Literature Philosophy sentient zombies tragedy tragic zombies