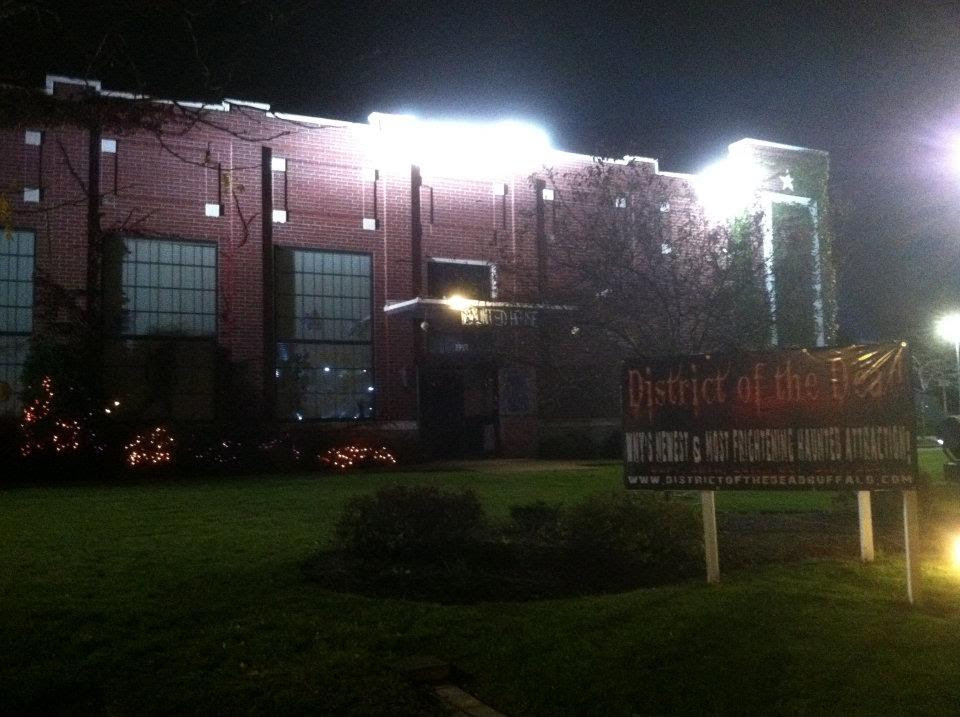 This past Friday, my friend Steve and I checked out a new haunt in Buffalo, NY.  It's called "District of the Dead", and it currently resides in the old Don Pablo's building on Elmwood Avenue, by the Regal Cinema.  You can check them out on the web here.  Now, when I review haunts, I take a few factors into account.  It's not fair to judge all haunts by the same standard.  It's important to consider:  How much did the ticket cost?  How many years has the haunt been in business?  What's the purpose of the haunt?  Who works there?  When I was in college, I used to run the Haunted Hallway with Steve and the other members of the Astronomy Club.  I know how hard it is to plan a haunt, purchase all the props, and convince people to come to the haunt.  There's a ton of work behind every haunt that people don't always consider.

The haunt itself was interesting.  It had the obligatory chainsaw - always welcome, as well as the claustrophobia section that is common in haunted houses.  I thought that the haunt was pretty good.  I went through it and screamed my guts out.  I went back in again, and screamed just as much as I did the first time.  The actors seemed to be enjoying themselves immensely, which is a big draw for me.  If the actors and actresses aren't enjoying themselves, why should I?  The set design wasn't very extensive, and there were no animatronic props - but remember, it's their first year.  They still have time to build a larger and more extensive haunt in the coming years.  (Personal note:  I prefer live people to animatronics any day!  The stupid whirrr noise they make is very fake.  I don't like being able to predict what's going to happen next.)

The Old Don Pablo's building made a pretty good first-haunt space.  It's a small-ish building which added to the atmosphere.  Also, being small, the props and actors/actresses weren't stretched too thin.  They were able to mix live action with props and scenery.

My only worry is the location.  Elmwood is a busy street, but it isn't situated in a place where it can be easily seen all day long.  Competitor haunted houses in the area are on busier streets, and are more likely to be visited by a spontaneous crowd.  Next year they should opt for a more prominent place.  On a good note, they advertised on Groupon.com, and have a Facebook page.  The souvenir cups were a great idea - it will keep their haunt in the forefront of people's minds.  It's also something that sets them apart from the other attractions in the area.  They don't have a concession stand as of yet, but I believe that will be something they will incorporate later.

After going through the haunt, Steve and I spent some time chatting with one of the minds behind the haunt.  Already, they are thinking ahead to how to change their haunt and improve it.  As it is, the haunt runs about 15 minutes, and will set you back $11.00.  If you show your ticket at the bar after the haunt, you get a free soda and a souvenir black light reactive cup that celebrates the haunt.  What's more intriguing than an $11.00 haunt?  An $11.00 haunt that donates 10% of it's profits for the opening year to Women & Children's Hospital of Buffalo of course!  The haunt is staffed by volunteers who also do their own makeup, and a company was on site taking pictures of people at a strategic point in the haunt, and you can buy them after you get out.  The makeup the volunteers did will give most attractions in Buffalo a run for their money.  Some of them even had prosthetic wounds and other gory details like slashed and believably bloody clothing.

District of the Dead is certainly a haunt to watch!  I'm excited to see what they come up with in the coming years of their operation, and I will most certainly add them to my list of yearly haunts.  It will be fun to watch them grow from a small operation to a larger one.  If you're in the area, I suggest you stop by.  In the meantime, bounce on over to Facebook.com where you can find their page, or just take this quick link.  You'll be in the loop about tickets, pricing, and hours.  You'll also be able to take a peek at the haunt in their picture section, and get updates on additional District of the Dead goings-on.
Buffalo District of the Dead Haunted attraction haunted house Haunts New York NY Women amp; Children's Hospital of Buffalo