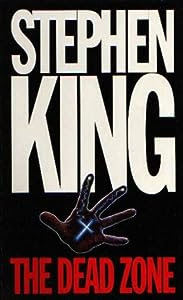 I vehemently refused to go to another bookstore after Borders started it's closing.  I wouldn't go - none of them appealed to me.  I complained to everyone I knew about the "loss of my favorite place on Earth"...and where was I yesterday?  Barnes and Noble.  Looking for a specific book (incidentally, they don't have it and I very well may be returning to another location of the same store in a few hours).

I fell from grace over a discussion of  a Patrick Wilson film.  Apparently, he survives an accident and upon waking, discovers he has a connection to the world of the dead.  My dad started talking about Stephen King's "The Dead Zone" which had a similar plot.  I was surprised that my father was going on about what a great book it was, because he isn't as much of a reader as my mom or myself.

So now begins my feverish hunt for "The Dead Zone".  My mom has a copy in hardcover, but I don't want to read hers because I read in all the oddest places, and if something happens to her book I'm dead meat.  Plain and simple.

This may also be the start of another Stephen King hitch.  I have read tons of his books, but there are several (including the entire Dark Tower series) that I haven't read yet.
Barnes amp; Noble Borders Borders Group Patrick Wilson Stephen King The Dead Zone traitor