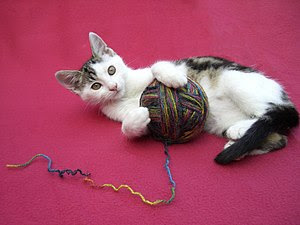 Ha ha !  Chris and I just came back from a stroll among the shops and I saw my first yarn bomb!  For those of you who don't know what a "yarn bomb" is, it's a random piece of knit or crochet that covers something.  This particular yarn bomb was a bit of crochet around a pole.  The pole was part of a gate, and the yarn bomb covered the bottom.  It made the pole look like it had a claw foot.  So cool!  If you're unfamiliar with the results of yarn bombing, then check out this link to my google.com search: yarn bomb.

We tried Moxie - the much maligned soda of Maine.  It was touted by our Duck Boat tour guide as a mix of "dirt and cough syrup".  Apparently us Buffalonians are more resillient - it tasted like thin root beer with a hint of anise.  Not bad.

I thought I would throw that out there - just saying.

P.S.  Here is a link to some other Maine Monster Foot Yarn Bombing. The pictures are from Freeport, Maine, where I was staying.  Maybe next year I will yarn bomb my own city.  :)  Thanks for the comment, Rose !  I never would have looked that up if you hadn't mentioned the holiday.
crochet knit Maine Moxie yarn bomb