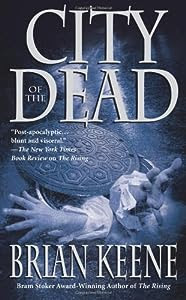 I finished "City of the Dead" on the car ride to Maine the other day, and I figured I should write about it now.  In another week or two things will get very hectic.  I will hopefully be returning to school to get my master's, and I will have other things taking up my limited time.  Therefore, while it's still fresh in my mind, I'm going to write as many reviews as I can remember (I'm fairly behind in my reviews).

"City of the Dead" is the thrilling conclusion to "The Rising", both of which are written by Brian Keene.  I'm not going to go into detail, since the last book ended so abruptly, and this book starts right away with the story.  What I will say is that we lose some good characters, and we gain a few along the way.  Character growth for those still (un)lucky enough to survive continues at a natural and realistic pace.

This book finds the demon-lord Ob continuing to amass his forces for the war against all life forms and their Creator.  He continues to have dry, morbid, and sarcastic humor.  I'm not going to lie - I really do enjoy his quips.  Some people have criticized Keene for it, but I have to admit, it really does enrich the story.  I wouldn't figure that a timeless demon-lord would always speak in an older style, especially when you figure that the bodies these demons are possessing are full of our current language and skills.  It stands to reason that they would update their language as well.

This book finds a group of survivors trapped in an impregnable New York City skyscraper.  The skyscraper was designed to withstand any kind of biological, terrorist, or natural attack/disaster that could ever happen.  The designer, Ramsey, has locked himself up inside the skyscraper, and he sends out forces to look for survivors daily.  Unfortunately for everyone else in the tower, he has a messiah complex, which I guess isn't unusual since his building is named Ramsey Towers.  He fancies him their ultimate savior, and comes to think that they adore him.  Most of the people living in the skyscraper are very diverse, with their own tales of woe and their own characteristics.  It's fun to guess who will be a main character, and who will become zombie fodder.  Keene writes so convincingly and with such back story that it's hard to decide who is a main character and who is not.

The climax of the story is truly unforgettable.  The zombies pitch and epic battle, and humanity's last struggle is no less epic.  The stories of all the characters intertwine, and you find yourself rooting for almost everyone.  Since the situation has become more dire in this book, there are virtually no rape scenes, which makes it an easier book to read.

Again, the book is a work of pulp fiction, so please don't expect it to be a classic for the ages.  "City of the Dead" is highly entertaining and worth reading, and I suggest it to anyone who wants to read something that isn't the usual zombie book.  Take nothing for granted, and make sure you have a few hours to spare - once you pick this book up you won't want to put it down!
Brian Keene City of the Dead Leisure Books Literature possession sequel Siqqusim The Rising zombie apocalypse zombies