[caption id="" align="alignright" width="240" caption="Image by Walt Jabsco via Flickr - The sword-wielding woman would be Michonne.  She's a wild one who makes some questionable decisions in the series, but remains an interesting character altogether."] 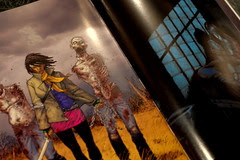 Almost a year ago I read "The Walking Dead: Compendium 1" which was books 1-48).  I read it in anticipation of the beginning of the AMC show of the same name.  Incidentally, "The Walking Dead" was also the first graphic novel series I had read, so it was a new experience for me all the way around.  As with almost everything that becomes a TV show or movie, I wanted to experience it first in print.  I didn't want to be

I immediately fell in love with the story of "The Walking Dead".  The people were realistic, you could almost expect them to walk right off the page and into your life.  There were characters that fit specific stereotypes, but not so much that it caused them to be one dimensional.  The story never lagged - character conflict kept the story going when the zombies weren't present.  There was never a superfluous moment.

The artwork in the book is fantastic.  The angle from frame to frame changes enough to give you an almost panoramic feel.  There are moments in the book when you can close your eyes and almost imagine a 360 degree view of where the characters are standing.  Moore and Aldard have created characters that look different enough that it's easy to tell from frame to frame who is speaking.  In later non-"Walking Dead" graphic novels I've read, I have found it almost impossible to figure out who is who.  Moore and Aldard have also created terrifying frames.  They seem to know just which moment to depict, whether it's a lone zombie sneaking up on someone or a horde descending on something.

I am currently waiting for Compendium 2 before moving onward.  Each book is so exciting and written so well it's easily to fly through it in a few hours (after all, books 1-48 only took me a weekend).  I would have happily paid more money if they would have included the covers for the individual books in the Compendium.  They do distinguish between the individual books, but I don't want to have to go back and buy the covers separately.  I'd rather have them where they belong, which is with the main book.

AMC's "The Walking Dead" will be back in October - I heard on October 16th, but that may change.  Do yourself a favor and go out and get the Compendium.  It's a great book in and of itself, but it also makes a great companion for the show (warning - the show doesn't follow the book).
black and white Charlie Aldard graphic novel Literature Robert Kirkman The Walking Dead Compendium Tony Moore virus zombie bite zombies