[caption id="" align="alignright" width="300" caption="Image via Wikipedia - A pub - pictured since the family witnesses a fatal stabbing in a pub one night."] 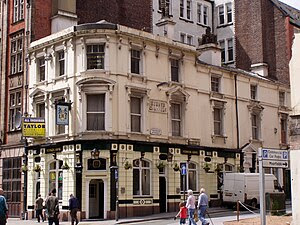 I resisted the urge to buy David Moody's "Hater" for awhile.  Truth be told?  It just didn't seem that interesting.  The description on the back of the book about violent people didn't really make me want to pick it up - which was a terrible shame because the cover of the book rocks.

However, I finally caved in, purchased the book (and its sequel), and read "Hater".  "Hater" begins with a series of vignettes about different people suddenly becoming afraid of those around them, and in self defense, they kill whoever happens to be the momentary source of the paranoia.  Interesting and engaging beginning.  But then something happens - you meet the guy who will become the main character, and the book seems downhill from there.  He's a henpecked nebbish with two (literally) screaming brat children who don't ever seem to stop nagging, and a wife whose every appearance is sure to be stomach-turning.  As the reader, you are drug through this poor sod's life as he encounters the beginning of the end of civilization.  On the news, more and more violent attacks are occurring, until he and his wife start to see things happening in their own neighborhood.

The premise isn't bad, the execution isn't bad, it's the family that kills "Hater".  By the time the main character becomes one of the haters and turns on his family, the reader is left all but wishing he'd do something to shut the kids up.  Every single time the children make an appearance, they are whining, sniveling, or clamoring for something the main character doesn't have the money to buy for them.  His wife is an unhelpful partner who often asks him just why he doesn't have the money to go out for ice cream, or the other costly extras of life.  As far as I'm concerned, he gains so much more from turning into a hater than he ever had as a normal person.

The book isn't really a zombie book as such, and I'm more than a little peeved that it has been marketed as such, but it is what it is.  I bought the second book, "Dog Blood" and fully intend to read the third book when it's published (I haven't read "Dog Blood" yet).  When I read a series I generally try and read all of the books, if only because the author has more to say on the subject.  I don't feel that it is fair to judge a whole series based on a book or two.

As a positive, I'm interested in seeing where Moody decides to take the plot, especially since he reveals the reason for the sudden and violent turn that everyone in the world has taken.  No - I'm not spoiling it for you!  Go read the book!