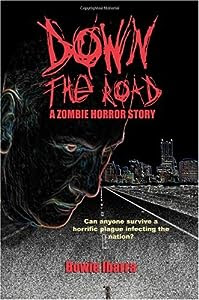 It seems to me that while teachers may not garner the respect they deserve in every arena in life, they are standouts in the zombie genre. Bowie Ibarra gives us yet another tale of an educator surviving the apocalypse long enough to be the main character of a book.

I had heard about Bowie Ibarra's "Down the Road" awhile ago, and it had been on my list to read.  It kept getting pushed back (I'm not sure why) until one day when I was looking at my e-mail.  Low and behold !  There is a second book.  My first thought was:  Damn.  I'm behind on yet another series.  Then I figured it didn't matter and purchased it - and I'm super glad I did !

The story follows the trials, tribulations, and heartbreak of George - a teacher desperately trying to reach his family.  The fact that he's stuck in a zombie apocalypse in the first place is at once unfair considering he has just lost his fiancee to a brutal murder a few months prior.  Things only seem to get worse just when they get better.  Eventually he gets stuck in a FEMA camp when he comes to a checkpoint in the road and is told if he doesn't comply he will be "neutralized".  At the FEMA camp, the people segregate by race and create gangs.  Amidst the chaos, several soldiers who were supposed to protect the people actually begin killing them as "examples".  It seems there are no end of tragedies in this camp, including rape, murder, massive fights, and the obvious - zombie outbreak.  (Apparently nobody in charge is smart enough not to admit those who have bites.  Go figure.)

I should also note that the sex in this book didn't seem out of place or unneccessary.  It fit the story, especially considering that according to David Moody on the cover it's "zombie pulp fiction".  The book isn't overly showy with scenes of daring kung-fu or anything like that.  It's simple and resonates with the reader.  If I were good with a gun, I could almost see myself in a similar situation (clumsiness and end-of-the-world panic aside).

One of my favorite aspects of Ibarra's writing I can't even really write about as it gives away too much of the ending.  What I can tell you is that the ending of the story is very unusual in that it looks at two different character's perspectives almost simultaneously.  If I wanted to recreate the same effect, I know I could't do it.  Ibarra has absolutely perfected the technique.  Another unique trait was the speed of the book.  Most books in the zombie genre either have a frantic pace or they change paces from relaxed to the-horde-is-on-your-doorstep panic.  For the most part, "Down the Road"  was evenly paced, with a few curve balls thrown in to remind the reader it was still the zombie apocalypse.  If I didn't know better (and maybe I don't) I would say Ibarra was using the zombie genre to critique human nature, and our priorities during a crisis.  A prime example would be the FEMA camp and the drug infested safe zone in which George is later invited to take shelter.  Honestly - who has time for drugs when the world is crawling, shambling, and slavering at your doorstep?

I was pleasantly surprised with "Down the Road" and I look forward to purchasing the next book and reading it soon.  I'm also looking forward to reading any other material Ibarra puts out on the same subject.
Bowie Ibarra Down the Road Gallery Books Literature teacher zombie apocalypse zombies