[caption id="" align="alignright" width="300" caption="Image via Wikipedia - Throughout the book series I kept reading about a "balaclava" but had no idea what it was.  Apparently the versatile piece of headgear in these silly pictures is a "balaclava".  "] 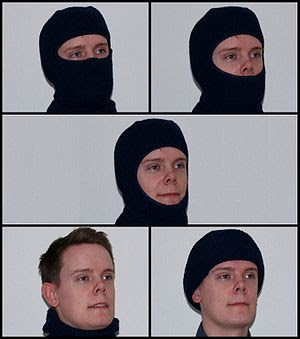 I don't know which is worse - waiting for a new book to come out in a series, or having a great book end and wishing for more.  I guess it all depends on how close you are to the release of the next book, doesn't it?  I was lucky enough to find Joseph Talluto's "White Flag of the Dead" series early enough to not be too far behind, but late enough to get in two volumes before the third came out.  (Another caution:  If you bought the self published version - you're waiting for the second book.  If you're like me and you own the Severed Press editions, you are going to read "White Flag of the Dead", then progress to "Taking it Back", then progress to nail biting and anticipating until the third volume comes out.)

I finished "Taking it Back" a few days ago but haven't gotten a chance to really post about it until now.  "Taking it Back" continued the story of survivor John Talon and his band of allies as they try to establish a network of surviving towns along a train track.  Talluto surprises and delights with several close-calls and the usual band of miscreant survivors who seem hell-bent on causing as much additional misery as they possibly can.

Talluto's growth as a writer is heavily evident in this section of the book.  Not only does he expound on previously created characters, but introduces an interesting array of other survivors.  I was pleased to see the addition of a femme fatale, just because it avoids the usual stereotype of the woman as the helpless wench that just gets in the way.  Sarah, John's closest female ally, is also another nice stereotype killer.  Along the way we lose a few established characters - not too many, but just enough to make the story believable, which is always a good thing.  (Relax - it's nobody you've probably become terribly attached to anyway...or is it?)

The action begins and doesn't stop.  My favorite part is the roaming, ravenous, grey cloud that comes sweeping towards an unsuspecting town.  What is it?  A hoard of dead.  When do they reach the town?  TOO SOON.  The obstacles that the townspeople and other survivors concoct for the dead are really fascinating - I'm absolutely positive that I'm doomed if there is a zombie apocalypse.  I am bereft of certain common sense, let alone using boxcars to create a fence!  Let alone having the skills to operate heavy machinery...

"Taking it Back" is by no means devoid of creepy moments.  I chuckled out loud when John went walking with (Tommy I think?) through a recreation center that was turned into a first aid station.  Obviously there would be zombies...but still they continue deeper into the building.  They find about a hundred or so cots and a mess of blood, and they respond by flashing their lights around...only to illuminate about 100 starving ghouls who proceed to give chase.  Thrilling scene, but by no means the best!

If you haven't jumped on the bandwagon and started reading these books, you really need to!  They are fascinating and intriguing.  Joseph Talluto is a great story teller that never ceases to surprise.  Any self respecting zombiephile needs to add "Taking it Back" to their collection.
ampitheater Joseph Talluto Literature railroad track Severed Press Taking it Back town White Flag of the Dead White Flag of the Dead Part 2 zombie zombie apocalypse