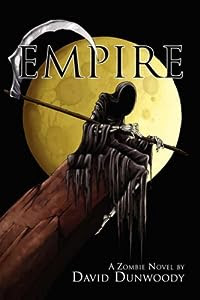 I finished reading David Dunwoody's "Empire's End" a few weeks ago but haven't been able to post anything because I've been so doggone busy writing exams.  I feel rather bad about this because it really is a great book.

The first book, "Empire" was an impulse purchase at a local bookstore.  When I saw online that the second book had come out, my eyes bugged out and I immediately bought it.  It arrived in the mail pretty soon and I was able to start it tout suite.

I was surprised at how easily I was able to pick up on the story again, after having read the first story so long ago.  In many ways, "Empire's End" feels more like a prequel than a sequel.  There is more background on Eviscerato, the circus ringleader who becomes infected, as well as on the plague itself.  My edition of the book also included a story about how the plague began and a re-print of Grinning Samuel.  I think the coolest part was how the supplemental material connected to the first and second books.  Everything made sense.

Dunwoody explores the origins of Death and what happens when it becomes more than an anthropomorphic personification, as well as what happened to some of the original survivors.  There is a boat-ton of gore and zombies (just how I like it!) as well as some new interesting characters.

If I were to pick the scariest thing about the book - Eviscerato's band of miscreant circus performers turned zombie horde.  Think Left 4 Dead - only worse.  There's a flame-thrower, a petrified man, and all sorts of others.  Scary stuff - especially considering that head honcho Eviscerato is a sentient zombie, capable of consciously amassing a zombie army and laying siege to a city.

There was one problem, however.  At the end of the book, I didn't understand Lily's relationship to Death.  (I'm sorry, Mr. Dunwoody - sometimes I miss things.)  That didn't deter me from enjoying this book.

On the other hand, I really loved how easy it was to transition from one set of characters to another within the story.  Dunwoody wrote about the characters long enough to advance the plot, and then when he reaches a cliffhanger - it's off to another set of characters.  In some books it's hard to keep track of who people are, and why I should care about them, and by the time I know it's time to read about other forgettable characters.  This certainly isn't the case with "Empire's End".

I haven't heard any news yet about a third "Empire" book, but I'm really hoping that one is written.  And soon!  I think even though the loose ends were tied up, there is still room to move within the "Empire" world.

"Empire's End" was a fitting and natural continuation of the first book, and I highly recommend reading both (and then joining me in bugging the author to write a third!)
Adam circus of the dead cities David Dunwoody Death Empire Empire's End Eviscerato Grinning Samuel Lilith Literature Permuted Press sentient zombie siege traveling circus