Before "The Walking Dead"...

[caption id="" align="alignright" width="300" caption="Image via Wikipedia - not quite "DEADWORLD" but better than I can draw !"] 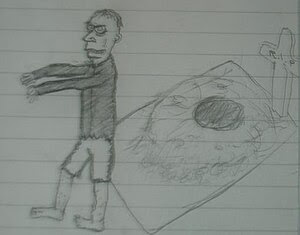 ...there was "DEADWORLD" (or so they tell me).  I bought the DEADWORLD OMNIBUS a few months ago based on the strength of the cover - it looked awesome.  There are a horde of water color zombies whose features are just barely recognizable.

Immediately "DEADWORLD" distinguishes itself from the typical zombie story.  King Zombie is free from Hell and looking for a specific man and a specific book that can help him to open wide the gates of Hell.  When that task is complete, all the horrors of Hell will walk the Earth and they will kill everything in their path.  Each book in the series adds new characters and new plot twists that keep the story engaging, and the reader guessing.

"DEADWORLD" really shines in its different artists.  Each book has been inked and created by a different mix of people, and the vast differences in styles are strangely complementary.  Some drawings are frantic and sparse and others use more contrast between stark white and deep black.  The different drawings assist the reader in switching from viewpoint to viewpoint within the story.

King Zombie is drawn mostly the same in each book, but with enough differences to fit in well with the overall art.  My favorite part of King Zombie is his attitude: fully badass and cheeky.  He hides beneath shades, and rides around on a motorcycle with a bandanna on his head.  His lines are occasionally amusing - yet I found myself feeling guilty for chuckling along with him.  Admittedly, sometimes I wound up rooting for the old sack of bones (oops - I know I should have like the survivors more, but King Zombie definitely has more interesting moments).

The zombie formula is also different in "DEADWORLD".  The zombies have added power and a definite hierarchy, in part from their book, and also in part from their direct link to Hell.  They are able to transfer into different bodies, mind-talk from far away, and all heed the call of King Zombie.  Definitely good stuff (from a literary point, anyway).

"DEADWORLD OMNIBUS" is a fairly quick read (named OMNIBUS because it contains all the DEADWORLD books to date), so if you like graphic awesomeness you need to add this to your collection.