The verdict is in. 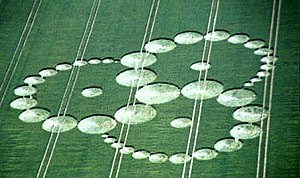 I finished "The Middle of Nowhere: Horror in Rural America" a few months ago and have been staunchly refusing to review it since then.  It took me forever to finish the book because I couldn't get into reading it.  Some of the stories were uninspired, some were predictable, and some were just downright boring.  I think my greatest pet peeve, however, was the editing (or severe lack thereof).  In one story alone, I stopped counting the errors when I reached 15.  Errors like words running together, misspellings, names that weren't even in the story, all of that should have been fixed because I bought the Anniversary Edition.  (My theory being that when you re-release something you make it better.)

Ok - so I've bashed the book sufficiently to give you my opinion of it as a whole.  Now I'd like to take a few moments to single out some of the authors whose work was pretty good.

Jacob Henry Orloff delivers an interesting take on alien abduction in "Crop Circles".  A man living alone on a farm starts to see circles in his crops, and he decides to stay on his farm.  The aliens arrive and all hell breaks loose, with a creepy ending.  What makes this story even more interesting is that it's written in first person as a letter to the man's parents, telling them what is going to happen.  He's writing urgently because he's sure that any moment will be the moment the aliens come for him.  An overall interesting take on abduction.

Alison Seay adds yet another creepy child to the annals of horror fiction with "A Hopeful Mother".  This story centers around a little girl who has an affection for bugs that goes much deeper than her parents think.  As it turns out, the girl understands bugs (as in, can hear them).  As the little girl grows up, her ability to live with humans decreases, and she's sucked further and further into her own bug-world.  Her mother is desperate to have a normal relationship with her daughter, and they decide to go on a hike.  The hike, however, reveals just how far the girl's bug obsession goes.

Michelle Bredeson's story "Lone September Night" has very little action, save for the sound of a scream that keeps repeating at odd intervals.  What makes it creepy is that there are three teenagers stranded in a house in the middle of the country with nothing but a shotgun.  (I mean nothing - they leave the house to figure out what the noise is, and somehow the door gets locked behind them, their car doesn't work, the power and phone go out.  Absolutely nothing but each other, a gun, and the dark.)  They wind up hiding in a barn.  We never find out what exactly is terrorizing them, and I think that only adds to the terror of the story.  Instead of opting for a lame ending with a predictable monster, Bredeson opts to remind us that the most frightening thing isn't what we know, it's what we can't see or explain.

My favorite story of the whole bunch was "Push" by Lucas Pederson.  As it is the last story in the book, I'm really glad that I kept reading.  It's really frustrating how little I can tell you about this story since it's all based on surprise.  Suffice it to say, I read the story and then went back and read it again.  It's tragic, thought-provoking, and has a few well-timed scares.  Overall, it's a very well written story that isn't predictable in the least.  What I will tell you is that it centers on a girl, her brother, and a dog alone in a house at night.

To be fair to the publishing house, I bought a few more of it's books for my Kindle, just so that I could give it another try.  I don't like condemning a publishing house or author based on one not-so-good book.  Therefore, you will see some more Pill Hill books up here as soon as I read them (or perhaps a little after).  This book can be rough to get through from time to time, but it has some interesting stories.  Overall, I'd say it was a so-so book, and as always I'm going to recommend that you read it (not immediately, but do get around to it) and then let me know if you find some more gems that I left out.