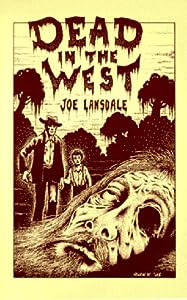 For a few years now I have been searching for the book "Dead in the West" by Joe R. Lansdale.  The first edition was published in 1986 - my birth year - and, to my knowledge, it is the first zombie western.

For Easter this year my boyfriend and I exchanged gifts, and I told him that first and foremost on my list of books was "Dead in the West".  He found me a mint condition 2005 edition that is SIGNED by Lansdale.  I almost died when it arrived.  (Incidentally, he builds computers - so I bought him some parts he wanted).

No lie, I read that book in three days.  Cover to awesome cover.

The story revolves around a Reverend named Jebidiah Mercer, who has lost his faith in God due to some shenanigans from his younger days.  He feels that he is unworthy of being the Lord's servant, and has resorted to holding prayer services specifically to get money to fuel his alcoholism.  He wanders from town to town and ultimately winds up in Mud Creek.  Mud Creek is a seemingly boring little town.  That is, until he finds out about the mob that attacked an Indian medicine man and his wife.  The mob hangs the man and does far worse things to the wife, and moments before dying the man vows revenge on the town.  It appears that Reverend Mercer has arrived just in time for the bloodbath that follows when the dead rise.

I can't say enough about how great I think "Dead in the West" truly is - Lansdale is a master.  At times the story is funny and at other times its heartbreaking, other times I thought I wasn't going to be able to turn out the light for fear of the images playing on my eyelids.  There is one scene in particular that caught my interest.  The good town doctor is in his study in the dark listening to the body of a deceased man come after him.  As he watches by the light of a single match, the body pieces itself together - all the parts crawling independently across the floor.  As usual, Lansdale adds humor when a nose decides to settle on a wayward finger instead of the face.  That notwithstanding, the whole scene felt very Lovecraftian to me.  It felt like it could have been straight out of "Herbert West: Reanimator".

If it is at all possible for you to track down this book and read it, then you should.  "Dead in the West" will make you a rabid page-turner.  With every page the story gets more interesting, and more frightening.  If you're not already a fan of Joe R. Lansdale, then this is the book to try.  He's one author you don't want to exclude from your horror collection!
1986 Dead in the West H. P. Lovecraft Indian curse Joe R. Lansdale Literature medicine man murder Night Shade Books Reverend Jebidiah Mercer zombie