Now for some watery terror ! 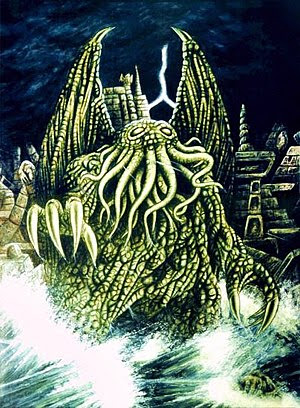 What a fabulous book!  "Beneath the Surface" was an amazing book!  Judging by the Cthulhu looking beauty on the cover, I thought these stories would be all about the ocean.  I was really off-base with that assumption, and all the better for it!

Almost every story in this book was a blast.  "Thorguson" by Scott Christian Carr started the anthology.  It details a submarine captain in his ship at the bottom of the ocean.  His whole crew is dead, but they're walking around and banging on the sides of the ship.  We never find out why they died, but we do find out what they're up to, and it's not too pretty.  The story is written from the point of view of the captain as he faces his horrible end.  Great story!

Next up is "Raw Materials" by Derek M. Fox.  After reading this story, I will never go for a road trip.  Not an unplanned road trip, nor a planned one.  Nor will I stay in a hotel that isn't run by a chain.  As one couple finds out, the kindly but slightly odd proprietors may just be after your hide!  All around creepy story.

"Stone Creek Station" by Scott William Carter provides an interesting look into a wish most people have at one time or another in their lives.  His character decides to go on a road trip after his wife leaves him, and he winds up in a little town with a big secret.  He follows the town elders out to a train station seemingly in the middle of nowhere.  As it turns out, the train station is for the dead, who come and visit periodically.  Wouldn't everyone like to talk to their deceased loved ones?  After reading this story, I know I changed my theory.  This story is both thought provoking and sad, and certainly not one to be missed.

Marie Brennan puts an evil twist on the Walt Disney Sleeping Beauty tale in "Kiss of Life".  I'm not going to say anything else, excepting that it's a times a riot and at times a terror, but it's definitely a story you NEED to read.

Angeline Hawkes delivers an interesting look at the power of relices in "The Relic: Father Santiago's Bones".  It's also an interesting look into why we choose the relics we do.  The father in question is actually part of the Inquisition.  He allows the rape, torture, and murder of an innocent girl in front of her own mother.  The mother curses him, and when Father Santiago dies his bones become relics.  However, they are not the good kind that grant prayers or heal babies.  They are cursed, and when certain people touch them, a terrible thing happens.  (I can't tell you, because it will ruin the story.)  This story is also a must-read!

To be honest, I liked the book so much that I almost wrote a summary for every story.  If there is one book you buy this month, you need to buy "Beneath the Surface."  It includes all the stories mentioned above, plus a money tree that punishes it's finder, a sadistic and hungry mattress, a nameless and ancient horror about to be unleashed, and a witch who steals souls.  There are many other stories in the book - and you NEED to read them all.