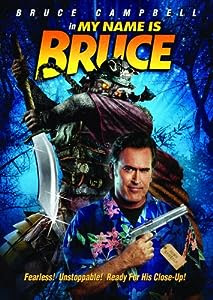 The always versatile Bruce Campbell shows his ability to actually laugh at himself and the kinds of movies that he makes.  I'm not sure that the same could be said about every other actor and actress that has made a similar mark on pop culture.  Recently, I saw "My Name is Bruce", which is sure to delight any Bruce Campbell fan.

The basis of the movie is this: Bruce's acting career is tanking, and he's kidnapped by a rabid fan who has accidentally unleashed the ancient Chinese god of War (and bean curd).  This fan thinks that Bruce will be able to save the town, based on his acting ability in such films as The Evil Dead.  Bruce thinks its a joke at first, but soon realizes that the sinister Chinese god is real, and coming after the people of the town.

This movie works on so many levels.  The first is that if you're a fan of Bruce Campbell, well, then I don't really need to say any more.  For fans of cheesy horror movies, you'll find some fun in the laughable foe Guan-di (god of bean curd and war), whose red eyes are little more than glorified flashlights.  I found myself laughing almost every minute during the movie, due in no small part to Campbell's ability to constantly lampoon himself.  (Perhaps that comes from knowing how much he means to the majority of the nerd-population, myself thoroughly included.)   There are some cameos of director Sam Raimi favorites, including his brother Ted, and a few guys who were in the original Evil Dead movies.  They make a few jokes about their previous roles, and they wear mostly the same clothing, so they're pretty easy to spot.  If you're a fan of Bruce Campbell and his movies, then you MUST see "My Name is Bruce".
bean curd Bruce Campbell Evil Dead Evil Dead II Gold Lick Grace Thorsen horror mining town Movies and TV Sam Raimi spoof Taylor Sharpe Ted Raimi