When sushi strikes back...

[caption id="" align="alignright" width="300" caption="Image via Wikipedia - Show some respect for your dinner !"] 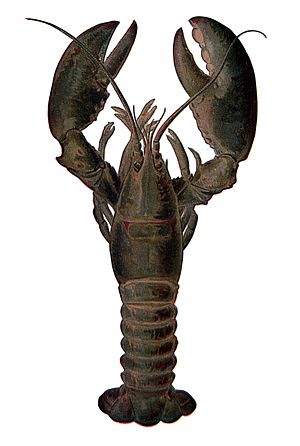 I recently finished reading an anthology titled "Dead Bait Anthology", published by Severed Press.  I think its a real blessing that I don't eat fish regularly, or at all, for that matter.  I lost my taste for it some years ago.  Having a hermit crab for a pet has caused me to not be adventurous where crab are concerned, though I did have lobster pizza once and liked it.  (Mostly because I couldn't see what animal it came from while it was on the pizza...when someone tried to cook lobster for me once, I cried for an hour.)

It seemed that with every page I turned, this anthology continued to outdo itself.  Before picking up this anthology, I had no idea that there could be so many fresh ideas centered around supernatural fish, or that the water really wasn't a safe getaway from zombies.  Every story was just as fresh and entertaining as the previous, with some even incorporating monsters I didn't know existed.  For example, "Dawes" by Steve Ruthenbeck, details the struggle one man wages against a monster known as a wereshark.  That's right - half shark, half human.  After it kills his new wife Melissa, Dawes vows revenge, with disasterous results.

Since all of the stories are amazing, I'm just going to give a little snippet of a few.  "Piraya" by Tim Curran details what happens in the Amazon when a chemical spill creates a school of dead(ly) piranha in the Amazon River.  When the water rises during the rainy season, several tourists are trapped by thousands of hungry mouths.

The first story, "Fox Goes Fission", written by Ron Lemming, is the story of a man who spends his time taking care of a haunted lake.  He is a native of the area, and returns after forestry school to take care of the haunted area, which claims the life of his family.  Aided by a ghost, he fishes for souls when the moon turns red.

Other stories involve a man trying to capture the mythical sea monster that killed his father, a slimy car salesman who becomes host to a horrible parasite, a ticked off oceanic giant hell-bent on avoiding the stew pot, and a mermaid who wants her eggs back.

This is definitely an anthology you want on your bookshelf!  The cover art is fantastic (a dead piranha, and all of the stories are top-notch.  Severed Press has created an amazing anthology, and you need "Dead Bait" right now!

(As an aside - Severed Press has announced that there will be a "Dead Bait 2", though I haven't heard any release dates yet, just that its in the works for 2011.  They recently closed author submissions - so lets hope it comes out soon!)