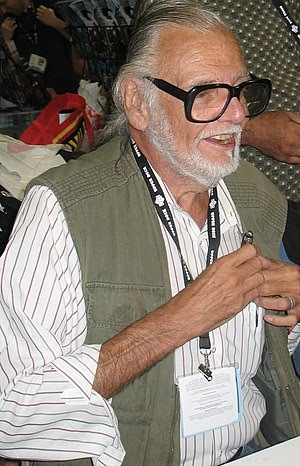 The third tale in "My Zombie Valentine" is from Marianne Mancusi.  Titled, "Zombiewood Confidential", it tells the story of a production crew for Romeo George's next big zombie film.  (Yes - that's right.  Not George Romero, but Romeo George - very nice nod to the zombie fans.)

Scarlet is a makeup artist working on Romeo George's next movie, along with her teen idol Mason Marks.  Standing between their romance is Cissy, the whiny diva that Mason has to date (it's in their contract).  What starts out as a low-budget zombie flick turns into total chaos and mayhem as the production crew, extras, and other unfortunates begin to turn into zombies.

Overall, the story was pretty entertaining.  However, its a little more tedious to read than the other stories in "My Zombie Valentine".  The problem, for me, was the lack of interesting side characters.  Mason's dog, Chico, was alright but by no means the star of the show.  The other makeup artist, Derek, could have been developed further.  His character was witty, interesting, and insightful.  I would have liked to have read more about him.

Overall the story was good.  It wasn't my favorite in the paranormal romance genre, but it wasn't bad.  The characters could have been developed a little further, but the setting and the nod to zombie movie great George Romero was appreciated.
celebrity celebutante George Romero island Literature makeup artist Marianne Mancusi movie sterotype teen star zombie apocalypse zombies