Recommended for a cheesy good time ! 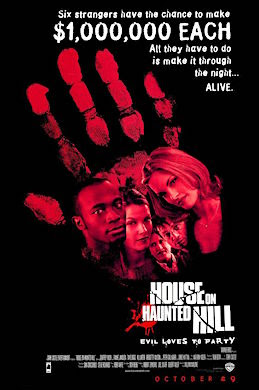 "House on Haunted Hill" is one of my favorite go-to movies when I'm not feeling well, or when I'm up for some cheesy good fun with decent acting.  Among the cast members are real screen gems - one of my favorites being the snarky Geoffrey Rush, who is to be able to take on almost any role seamlessly.  Taye Diggs and Ali Larter are also unexpected (and I believe at that point, relatively unknown).  Chris Kattan showcases his diversity - as the current owner of the haunted asylum and not as the usual funny man.

The plot is rather simple - the spoiled wife of an amusement park tycoon wants to host her birthday party at the most haunted place on earth - which just happens to be Vanacutt Psychiatric Institute for the Criminally Insane.  The spoiled wife, Evelyn (played by Famke Janssen), sends her guest list to her husband Stephen (Geoffrey Rush).  Just before Stephen sends the list, it is mysteriously changed (we assume by the asylum), which results in a group of strangers arriving for the party.  Stephen enjoys his wife's irritation and decides to continue the party - adding that anyone who survives the night will receive $1,000,000.  To sweeten an already good deal, Stephen casually mentions that the total money will be divided among whomever survives (in other words, if you die, someone else gets your money).  The aylum's owner Watson (Chris Kattan) warns everyone that they won't survive the evening if they decide to stay.  He won't explain why, but is very adamant.  Before Watson can escape the asylum for the night, the asylum's defense system kicks in and metal panels cover the windows and doors.  Its only then that Watson begins to tell the true history of the asylum, and the capabilities of the evil that lurks within.

There - that's enough of a teaser - go rent the movie !

The movie didn't do well as far as reviews go, but I rather enjoyed it.  I thought that the special effects were pretty good, and the plot was decent.  Where the movie really shined was the acting.  Geoffrey Rush is by far the best actor of the film, but Chris Kattan is a close second.  Rush was able to create and maintain a suspension of disbelief which allowed the viewer to begin to care about the characters.  Rush began as the character I loved to hate, and then towards the end transforms himself and shows that despite all of the bluster and the wife-hating, he was actually a good person.  The transformation was believable, interesting, and felt "right".  At first I was worried that Chris Kattan's humorous roles would impede on his ability to be the flighty owner of the asylum, but I was completely wrong.  Kattan carried his role admirably.  As a direct result of this movie I gained greater respect for his acting.

This movie is well worth giving a try.  The acting is great, the special effects are good, and overall its a good movie.  As I said before, its a cheesy good time.  Nothing Oscar-worthy - but definitely a fun movie to watch with friends or on a date !
Ali Larter asylum Bridgette Wilson Chris Kattan Famke Janssen Geoffrey Rush ghost haunted house Jeffrey Combs Lisa Loeb Movies and TV Peter Gallagher Taye Diggs