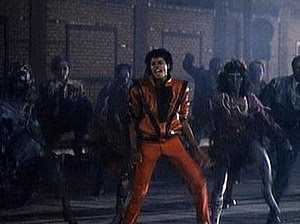 Next up is "Zombie Felties: How to Raise 16 Gruesome Creatures from the Undead" by Nicola Tedman and Sarah Skeate.  Whew !  What a title !  And yes, there is another story to go along with "Zombie Felties".  I was looking for the "Creepy Cute Crochet" book at a bookstore when I came across this book and I had to have it.  As a kid, I loved the "Thriller" music video, and still listen to it all the time today.  The picture of the Michael Jackson feltie was all it took to get me to buy the book.

So I bought the book thinking these little felties would be the easiest thing to make in the world.  A "feltie" is made from cut out felt pieces with buttons, beads, sequins, embroidery floss and other embelishments.  I regret to admit that there is, however, one little catch that nearly cost me my dignity at work.

I sat down a few days later after having collected the supplies and began making the zombie dog.  When I got to the point of gluing the pieces together with super glue, I came across one of life's little truths : it doesn't matter what you know (or think you know) about super glue, you will inevitably glue your appendages together at some time while using it.  Long story short, I went into work with glue on my face, my fingers, my hair, and a few splotches on my clothes.  (I am a part time lifeguard at an indoor pool when not obsessing over zombies or substitute teaching).  As I was leaving work that afternoon, a coworker told me that its possible to remove super glue with nail polish remover.  I haven't tried it, but the next time I make one of these felties, I will have a few bottles on hand.

The patterns in "Zombie Felties" range from super cute to mildly frightening.  I don't think I have a favorite pattern, although zombie dog and the undertaker are certainly at the top of the list.  I recommend this book for people who are highly crafty, or who enjoy challenging themselves not to glue their fingers together.  For the rest of us, its nice to have on the shelf for the day when we feel compelled to give it a try (or if we're lucky enough to make the acquaintance of someone who can actually make this kind of crafty stuff.)

If I had it to do again, I'd buy the book, but I'd sucker my boyfriend into trying to make me a feltie before attempting to do it myself.
Arts and Crafts Day of the Dead zombie felties Michael Jackson Nicola Tedman Sara Skeate super glue surfer zombie Thriller zombie zombie baby zombie cat zombie dog zombie fairy