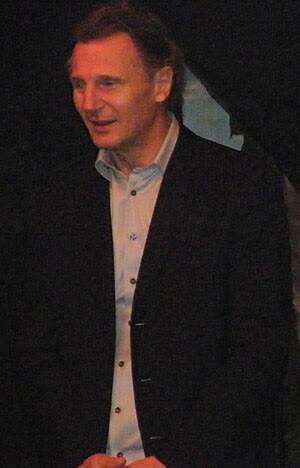 Tonight I watched a really odd movie (surprise, surprise) starring Christina Ricci, Justin Long, and Liam Neeson.  The movie, called "After.Life", was released in 2009.  The premise is pretty straight forward: Ricci is a young woman who is killed in a car accident and taken to the mortuary where her body is prepared by Liam Neeson, who has a penchant for talking with the dead.  Ricci is convinced she's not dead, but Neeson says otherwise.  Her funeral is in three days and the race is on to figure out exactly what's happening.  Will her almost fiance Long be able to save her?

This movie was billed as a thriller, but to be honest it didn't get really unsettling until the very ending, as things started to come together.  Up until then, I spent the movie trying to figure out what was happening - was she dead or alive? Was Neeson a good person or bad?

I enjoyed "After.Life" despite it seeming too long in the beginning.  When the movie began to pick up, it did so in a way that caused me to slowly get more tense.  At first I didn't even realize I was nervous!  The conclusion is pretty good, and answered all the questions I had about the movie (which is always a good thing.  I hate having unanswered questions that movies - sometimes the lack of answers ruins the movie).

Liam Neeson is always a joy to watch onscreen.  He can play a variety of characters without being the same person twice.  I hate watching movies where the actor is always the same, or always plays the same character.  (That's what I loved about "Road to Perdition" with Tom Hanks - for once he was the sinister element, not the comedic or romantic element.)  Its good to have Christina Ricci back in the spotlight, although my one complaint is the gratuitous nudity.  They kept showing her topless after the first half of the movie.  I suppose it could be argued that she was being born into a new existence, and therefore needed to lose the trappings of her previous life, but it still felt a little forced to me.  She's a good enough actress that she doesn't have to disrobe to be noticed.  Justin Long was a good choice as the fiance.  He plays panicked characters very well.  His development as an actor is visible in this movie.  He carries himself with much more ease and confidence than he did in movies such as "Die Hard: Live Free or Die Hard".

If you're looking for an interesting movie that will keep you guessing, then I highly recommend "After.Life".  The build-up and pacing were good, with a supremely creepy ending that you most likely won't see coming.
After.Life Christina Ricci dead funeral home ghost Justin Long Liam Neeson love Movies and TV regrets zombie