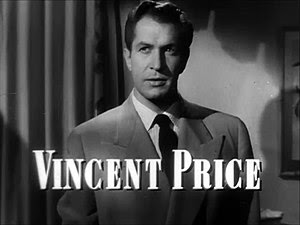 When I was a child, I had a terrible crush on actor Vincent Price.  I don't remember exactly how it began, but I think it had to do with my viewing of an AMC showing of "House of Wax".  Which ever movie it was, I remember Vincent Price starring, and a skeleton with obvious wires being lowered into a vat of acid.  [If anyone remembers which movie that is, please let me know.  I want to get it on DVD if possible!]  Anyhow, I saw "Tower of London" tonight for what I thought was the first time, but apparently I had seen it before because I remembered the ending.  I thought it would be in keeping with my recent leitmotif to write a blog post about it, being that it is a retro horror film.

In the 1962 movie "Tower of London", Vincent Price gives a virtuoso performance as the mad King Richard III of England.  Why is this movie in a horror blog, you ask?  Simple.  What is more horrible than fratricide, multiple homicide, torture chambers, unrelenting ghosts, and a quick descent into madness?  Oh, and it is loosely based on history too.

Vincent Price was a gifted actor.  He was able to show the King's change from somewhat sane murderer to doddering madman.  Price was never out of character during this movie.  He was positively revolting as the cruel hunchbacked man who rose to power on a wave of the blood of innocents.  While demanding that the rack be tightened on one of the servant girls, the look on Price's face is terrifying.  If I didn't know it was a movie, I'd be seriously worried!  [The actress being broken on the rack was pretty convincing too.]  Price was so ruthless, in fact, that I didn't feel pity for his character during the movie, but rather fear for those who had to come into contact with him.

What I found to be the most intriguing about the movie was the duality of Price's performance.  Was the King really seeing the ghosts of those he murdered?  Or was his guilt driving him mad?  Perhaps it was a combination?  So far as I could tell, Price never gave the answer.  The audience was left to make their own conclusions.

If you're looking for a good, old-school horror film with class then I suggest you rent or buy "Tower of London".  All the performances are top notch (though I'm inclined to say Vincent Price stole the show).  The sets are very effective in conveying the time period without being outlandish, and the music fits perfectly without being too outdated or too modern.  Overall this movie was very well-done.
AMC England fratricide ghost guilt House of Wax hunchback Joan Freeman limp London madness Michael Pate Movies and TV murder revenge Richard III torture Tower of London Vincent Price