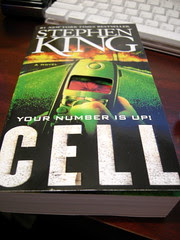 I would like to preface the following review saying that when I grew up I lived on a steady diet of Stephen King books and hot dogs, washed down with Kool-Aid.  From the time I entered middle school until I graduated from high school.  No lie.  So, it goes without saying that I would read "Cell", widely accepted as Stephen King's take on the zombie culture.

I just finished the book last night and I'm honestly not sure what to think of it.  I didn't get the distinct "zombie feel" from the book.  I think of it more in the vein of science fiction, rather than horror, but that could be because of a numbness I feel towards certain books.  For over a year now I've been almost exclusively reading zombie books filled with missing limbs, violent deaths, and reanimated eating machines.

The story begins with graphic artist Clayton Riddell trying to get his newest graphic novel published.  At approximately 3:03 pm he's standing on the sidewalk watching almost everyone in sight on their cell phone.  Suddenly everyone goes nuts.  They start jibbering, getting violent due to a signal that they received on their cell phone that wiped and reprogrammed their brains.  Then, all kinds of awful things start happening - car wrecks, explosions, murder - and out of nowhere he bumps into Tom McCourt - another person trying to escape the madness.  They run into a few more really interesting characters along the way (fiery Alice Maxwell, headmaster Charles Ardai, geeky Jordan, and the freaky Raggedy Man.)

Despite strong characters, I'm still not sure what to think of "Cell".  Honestly, I have been putting off the review because I'm not sure what to say.  It was an interesting book if you its approached from a sci-fi standpoint, but I'm not sure about it being a zombie story per se.  The "zombies" begin to exhibit flocking behavior (like birds), they develop telepathy and a group consciousness, and also begin to levitate.  However, if you look at zombie-ism as being like somnambulism (sleep-walking) then they are very much zombies, they just lack any homicidal tendencies towards the end of the book.  The slow build-up of the change in the zombie behavior is welcome, as it seems impossible that they could develop so many new changes in brain format so quickly.

My major issue with the book was that I wasn't scared.  Other Stephen King books I've read have had me absolutely terrified.  While "Cell" was in interesting read, it wasn't very scary.  The strength of the book is the characters.  The main group of survivors are interesting people with little quirks that make them very realistic.  As with most of the books I review, I urge you to go out and buy this book and make an opinion for yourself.
cell phone flocking behavior levitation Literature Stephen King telepathy zombies