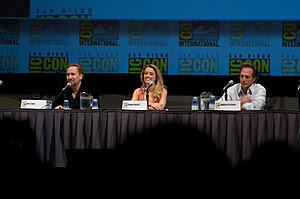 The other day my boyfriend and I went to see the new Nicholas Cage movie, "Drive Angry 3D".  I had purposely not seen the trailer for it prior to going, because I have found that lately the trailers show the entire movie.  What a disappointment it is to then go and see the movie, realizing you've seen the whole thing before - just not in the correct sequence.

There's not a really deep plot to "Drive Angry".  Nicholas Cage is going after the man who killed his daughter (masterfully played by Billy Burke - who has now officially broken out of the stigma of being "the dad from Twilight". Not that I have anything against the "Twilight Saga", lord knows I've seen the movies and read the books, but still - he's a great actor and needs to be in more movies.)  In any event, the cool part about the movie is that Nicholas Cage is a very special kind of escapee, and his nemesis (possibly frenemy?) is a man with supernatural powers called The Accountant (played masterfully by William Fichtner).  He is helped along the way by the too-pretty-to-be-human Amber Heard, and his enemy is a cult fanatic (Billy Burke).

The movie was pretty good overall.  It reminded me almost of a "Constantine" remake.  Most likely that stems from the common subject matter of escaping Hell and having only a certain amount of time before having to go back.  The movie was lightened several times by Fichtner, whose character The Accountant was given a few moments of genuine humor.  The movie also boasts the funniest sex scene that I've ever seen.  (I'm not going into detail - go see the movie.  But it really is funny.)    Fun fact - Amber Heard plays the blond neighbor who first teaches wimpy Columbus the lifesaving "double-tap" technique in "Zombieland".  (I come from a family of movie buffs - we like trivia like that.)  Billy Burke is very refreshing as a cult leader.  At first, he's unrecognizable, and I think that attests to his acting ability.  I usually don't like going to see movies where the actor is the same, no matter what part they are playing.  Burke can do bad very very well.  If for no other reason, this movie should be on your list to see, though I'm not sure if its worth purchasing.  It's more of a rental or Netflix movie.  The movie is also rather gory, and I had to hide my eyes for the first few moments.  While the movie didn't overdo the 3D aspect, it was still rough seeing a hand blown off someone's wrist and watching the hand appear to fly out over the crowd at my face.

"Drive Angry" wasn't anything over-the-top special, but it definitely wasn't a terrible movie.  It was gory, funny, and stressful at times.  The actors and actresses all carried their parts well and the story was interesting.  Go see it before it leaves theaters - and make sure you see it in 3D !
Amber Heard Billy Burke Constantine cult David Morse devil worship Drive Angry Hell Movies and TV murder Nicholas Cage revenge satanism Twilight Twilight Saga William Fichtner Zombieland