Yet another great anthology if you're looking for something new... 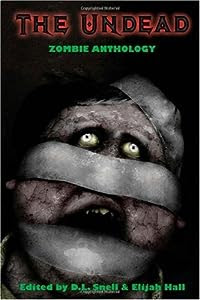 Yet again another gem of a book from Permuted Press.  "The Undead Zombie Anthology" is a really great anthology.  I'm not familiar with many of the authors, but I wouldn't hesitate to read anything they write from now on - every author is top of their game.

Usually when reviewing anthologies, I pick a few stories that I showcase based on a variety of factors.  As I was reading this anthology, I kept trying to figure out which stories to showcase.  I just finished this book about three hours ago and I still can't decide what to include!  Do I include the story about the lycanthrope who can't decide what to do about his zombie father?  Or maybe the story about the zombie squid - that was a doozy!  Or perhaps I should mention the one where Frankenstein's monster joins the fray against the undead, or the woman who falls through an abandoned mine shaft and into the middle of a reality TV show where contestants battle for their lives against the undead.  The story about the two scientists (read: virus-creating-suckers) stranded on an island with the ravenous and oh-so-dead bodies of their research crew?  Maybe the story that teaches us that just when it can't get any worse, it does because you get possessed by an evil force during a zombie apocalypse?  No, I think in the end I will just say that you absolutely have to read this book.

All of the stories are well written, taking only about four or five pages to make you wet your pants.  Each author's voice is distinct, with a unique style and perspective on what it means to be a zombie.  Some of the stories are traditional, featuring hordes of starving shamblers.  Other stories feature zombies who are cognizant of the impending change.  I guarantee this book of horrors has something for every zombie fan.