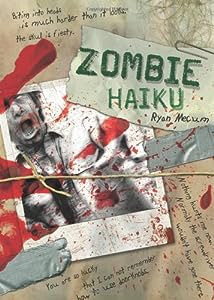 Finally !  Zombies are shambling into the world of poetry !  "Zombie Haiku" by Ryan Mecum was more entertaining than I had first expected it to be.  I thought that the book would be a disembodied jumble of different haiku versus dealing with zombies.  Apparently I was wrong.  The book follows the journey of one man during the apocalypse.  The book begins with regular nature-themed haiku (which are written well) and progresses towards the apocalypse and one man's fall from human to undead.  Even as a zombie he dutifully records his experiences.  (Another plus is that the poetry changes noticeably as the man slips deeper into becoming a zombie.)  The book is interspersed with pictures and blood splotches which add to the creepy mood of the book.

More than once I found myself laughing out loud at the true absurdity of the haiku verses.  This book was written to be read aloud !  I love watching the reactions of people who have absolutely no idea what I'm reading.  The looks on their faces are hysterical !  "Zombie Haiku" is a welcome change from the usual hard-core gore and sad stories that I'm used to reading and reviewing.  If you're looking for the lighter side of being dead - look no further !  (I'd like to include a verse or two in here, but I don't want to run the risk of copyright infringement - trust me - it's worth reading so go out there and buy it !)
haiku Literature poetry Ryan Mecum zombie apocalypse zombies