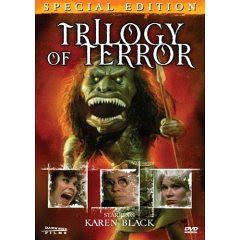 Ok - so apparently this is what I do at night when I need to go to sleep before work but can't - I blog.

Anyhow, about "Trilogy of Terror".  I first saw the second movie on TV when I was a kid, and that was when I was introduced to the main attraction of the movie - a little Zuni Fetish doll named He Who Kills.  (If you're wondering what he looks like, he's on the cover of the DVD...)  Nasty little guy, isn't he ?  All the stories in the movie are based on Richard Matheson stories, and all star Karen Black, as are the stories in "Trilogy of Terror II".

I decided to buy "Trilogy of Terror" since I'd never seen the first movie.  The movie was filmed in 1975.  The effects are very much on par with the time period - but I think they're still relevant today.  The little Zuni Fetish doll looks frightening when he is first taken out of his box, silly when he first starts running around, and is the epitome of a nightmare when he begins wielding kitchen knives.  (Apparently his name is not a misnomer.)

By far the most memorable vignette in the movie is the last, sporting my favorite Zuni Fetish doll.  If you're wondering about the title, the vignette is called "Amelia", after the woman who is the central character.  Apparently I'm not alone in my abject terror of the doll because on an IMDB.com forum, I found a post entitled, "That mother f'ing doll!!, which can be found here   http://www.imdb.com/title/tt0073820/board/nest/113227049.

On a side note, apparently the Zunis are a Native American tribe from the western United States, and the dolls they make are of cornhusk, NOT African wood.  I will be reading Matheson's short story "Prey" to see if these details are there.

What a great movie !  Karen Black is a versatile actress who can play many characters in the same movie without seeming ridiculous.  Her signature hair will always give her away, but nonetheless, her acting is superb.  The vignettes in the movie are all original and very entertaining.  If you are looking for a seasoned classic, I would suggest "Trilogy of Terror".
He Who Kills Karen Black Movies and TV Richard Matheson