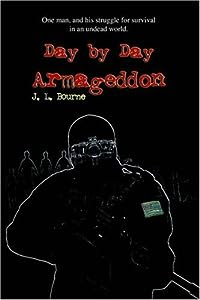 When I was perusing the shelves of a local bookstore this summer, I accidentally bought the sequel to this book before buying "Day by Day Armageddon" by J. L. Bourne.  Those of you who know me might not be surprised, because when it comes to zombies I literally voraciously acquire any material I can.  I went back the next day and not only purchased the first novel, but three other zombie books as well.  The lesson being that fewer trips to the bookstore equal more money in my pocket.

It has taken me awhile to write this review because I wanted it to be a fair review, both to the author, and to whomever reads my website.  Please, keep in mind that the faults that I found in this book are due more to my preference than in any shortcomings of the author.

I'm going to start by saying that this book is not for everyone.  While I wasn't impressed with it, my best friend read it and the sequel twice back to back within two weeks of me giving him the books.  (Don't be alarmed - I loan my books all the time.  That's why I'm divided on the new ereader craze...)  Both points of view will be discussed in this review.

I wasn't thrilled with "Day by Day Armageddon" primarily because I'm  an optimist with experience (also known as a cynic.)  The characters were able to escape too many situations that should have ended in death.  However, it seemed that at the last moment all necessary conditions would be met.  Conditions such as, there's a girl stuck in a car who just happens to be noticed by the main character who just happens to be able to lure the zombies away, and she just happens to be on the verge of death but not die and is able to fully recuperate.  Miracles like this are good in a book, but not on every page.  Also, if memory serves correct, none of the main "good guys" die in the first book.  To me, that's a little unbelievable.  Even with having read so many zombie books, I give myself about two weeks during a real zombie apocalypse (2 weeks after everything goes totally to hell) before I make a mistake or my luck runs out and I'm dinner.  So for me, it's hard to imagine all these people managing to survive for so long without a loss of a person.

That being said, there were some really outstanding qualities in "Day by Day Armageddon".  The first being the characters.  Each character is interesting and brings a new point of view to the book and a new skill to the entourage of survivors.  The main character is a military figure who is a strong leader, as well as a pilot.  The format of the book is also intriguing - I like books that are set up as journals and diaries.  This book format helps me keep track of just how quickly (or slowly) the zombie apocalypse actually occurs.  It also keeps the reader more intimately associated with the characters, because there is no omniscient narrator describing the whole scene.  The reader is experiencing everything from the direct point of view of another person and what is important to that person.  This approach makes the characters of this book much more real.

I said earlier in the review that my friend loved the book and its sequel.  He loves playing flight simulator games, and uses pilot language like "check 6" before getting off the telephone.  For him, this book was like a dream come true - it had all the heroic trappings of a good military novel, and had zombies to boot.  (The main character knowing how to fly military aircraft didn't hurt either !)

As I bring this review to a close, I would like to strongly urge you to buy this book and make your own opinions.  Previously stated, and now stated again, the issues I had with the book are due to my own perception of a zombie apocalypse and not to any faults of the author.  I view it as being chaotic, with little chance for luck.  J.L. Bourne is a great author, and I am looking forward to reading other books he writes.
armageddon J.L. Bourne Literature zombie apocalypse zombies