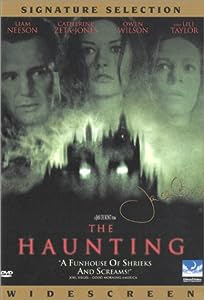 "The Haunting" is based on an unremarkable book by Shirley Jackson.  The movie, on the other hand, is very enjoyable.  Liam Neeson is a great asset to the film as always, and Catherine Zeta Jones is a great supporting actress.

"The Haunting" has an interesting plot - Liam Neeson plays Doctor David Marrow, a man intent on finding evidence of the supernatural.  Catherine Zeta Jones, Owen Wilson, and Lili Taylor are study subjects picked from a vast survey for a study on sleep health.  As can already be suspected, things go poorly for all involved.

The haunting phenomena is different from the book - it's more agressive, dangerous, and frightening.  One of my favorite scenes in the movie is the lion-shaped draft dodger in the fireplace.  It seems to drop out of nowhere at first and scare Lili Taylor (who plays the mentally unhinged Eleanor).  When the huge metal lion makes its second appearance, it takes Owen Wilson's head completely off his shoulders !  Word to the wise - stay out of fireplaces that are so big you could host a tea party in them.

The story is greatly enhanced by the addition of a pedophile angle regarding Hugh Crain (the man who built the mansion).  He brings children up from the factories and has them live with him, and its found out that the children disappear.  Anytime children and weird people with terrible motives are combined, its sure to be frightening.  Other haunting phenomena include moving walls, angry bedposts, blood writing on the walls, and a veritable host of other supernatural goodies.

Each of the actors and actresses played their parts well.  No one stood out as being out of character - everything was believable.  The sets were lavish and creepy, which was what you'd expect from such a large house with a terrible history.

"The Haunting" is more enjoyable and scary than the book on which it was based ("The Haunting of Hill House" by Shirley Jackson).  If you're the kind of person that likes to read the book and watch the movie - read the book first - no matter what !  I really enjoyed watching "The Haunting", and I think you will too.
Catherine Zeta Jones ghost story haunted house Liam Neeson Lili Taylor Movies and TV Owen Wilson