A knockout book from a new author... 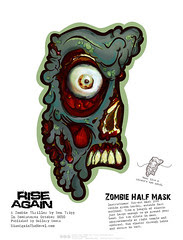 Ben Tripp's "Rise Again" is a relatively recent addition to the annals of gore-encrusted zombie literature.  Before I get into the review, I have a terrible thing to admit.  Its absolutely unforgivable, but its true.  I wasn't even aware of the existence of "Rise Again" until I went searching on google for "zombie bookmarks".  Ben Tripp offers not only these, but other goodies on the novel's website (riseagainthenovel.com).  After having downloaded the bookmarks and that insanely cool mask pictured at the left, I had to buy the book.  I'm not a freebie-seeking-heel you know.

Anyhow, I went straightaway to a bookseller because I had to have the novel in my hands that instant.

"Rise Again" is on my favorite zombie novels list.  This book seems to have it all !  The rag-tag group of survivors is lead by Danny, an Iraqi war veteran with mental and physical scars who is pursuing her runaway sister when the crisis breaks out.  The other characters are just as strong - as are the emotions you feel for them.  All of the characters have unique quirks that make them seem like real people.  For instance, there's Danny's best friend Amy, the veterinarian.  She has a knack for stating things that at first may seem obvious, but is in fact very deep and purposeful.

You may think me awful for my next point, but I assure you, its very true.  Its nice to know that sometimes books estimate physical damage correctly.  Danny goes through so many dangerous situations and has her body wracked by adrenaline, impacts, pretty much anything you can think of (and one or two I'd bet my life on you wouldn't see coming).  The amount of injuries she suffers only adds to the realism.

The zombies themselves are terrifying.  At first, the spread of infection seems rather lame.  People running around screaming and then falling dead.  The next step is that the begin to rise.  They wander around and bump into things (still not entirely frightening).  The attacks don't happen all at once.  Rather, one zombie decides to bite and then the feeding frenzy begins.  The zombies also evolve as the story continues.  The zombies evolve in waves - each new wave of infection creates more adept zombies.

I was unable to put  Ben Tripp's book "Rise Again" down for any significant length of time.  The characters and story were interesting, as was the portrayal of the zombies.  I really hope there is a sequel some day.  The ending almost killed me - it was poignant and terrifying at the same time.  The best part ?  I have no idea what the ending meant.  The ending is beautifully ambiguous - it can be interpreted in at least three different ways.  I love endings like that, where the reader is carried away on a tidal wave wondering what happened !  Even if you're not the type that likes that kind of ending, I assure you - this book is not to be missed !
Ben Tripp Literature zombie apocalypse zombies