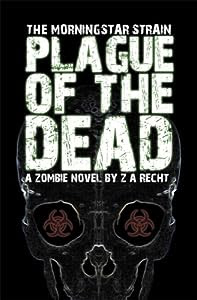 What a book !  I just finished Plague of the Dead today - and it was one of the best books I've ever read in the zombie genre.  Recht's book is fantastic !

The characters in the book are very believable.  None of them stand around and whine about their situation, or give superfluous background information that isn't necessary.  I think its' better not to know too much about the characters.  When something like a zombie apocalypse occurs, things tend to change.  For that matter, people tend to change.  When the only motive is staying alive for another minute, people show more of who they are, whether its in caring for other people or putting themselves first at all costs.

The characters are not stereotypical by any means.  In fact, they are quite the opposite.  Heading the survivor camp is General Francis Sherman, a man who likes the civilians he protects, and in some cases even allows them to fight alongside the enlisted men.  Julie Ortiz, an investigative journalist, holds for weeks against mental and physical torture when being held captive for leaking vital information to the public about the Morningstar Strain.  There are more characters, but I refuse to spoil all the fun - go read the book !

Recht is very detailed about the virus, to the extent that often it becomes hard to remember that the Morningstar Strain does not exist.  When someone is first infected they experience severe flu-like symptoms which turn into a kind of mania.  The mania phase causes them to sprint after uninfected persons (attempting to find more hosts for the virus).  When the host body dies, the virus takes over fully and propels the bodies along as "shamblers".  The transition from sprinter to shambler is a great way to bring together two ends of the zombie spectrum - those that think zombies should run, and those that think zombies should shamble - thereby having something for everyone.

Plague of the Dead was really difficult to put down in order to do other things.  Every page seemed to teem with a relentless assault from the living and (truly?) dead.  I get irritated when zombie books act like the apocalypse contains isolated, infrequent zombie attacks.  When I think about the population of the United States, and the world, I find it impossible that the streets wouldn't be filled to the brim with carriers, zombies, and people dying.  Plague of the Dead depicted this kind of anxiety and adrenaline filled world.

Overall it was a phenomenal book !  I highly recommend that you go and pick this book up NOW.
carriers Literature Permuted Press shamblers sprinters virus Z. A. Recht zombie zombie apocalypse zombie plague