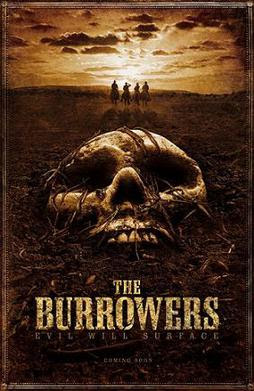 The first time I was aware of "The Burrowers" came from watching a movie trailer.  It looked really good - American settlers being terrorized on the open countryside by burrowing monsters that attacked from underground.  My kind of movie !

Last night my boyfriend and I found it on Netflix and decided to watch  it.  It was an awful movie.  Before I tear the movie to shreds, I want to state its good qualities.  First and foremost, the acting was good.  Not award winning, but good enough to make me believe in the characters.  The costumes were authentic looking for the time period as well.  Nothing too flashy, nothing too drab.  Even the costumes of the American Indians didn't look over dramatized.  The music worked really well for the film.  It was dramatic when it had to be, but otherwise helped keep the period feel of the movie.  The locale was convincing as well - no specific place I could point to, but understandably American.

Please be advised that the next part of the review will contain spoilers.  If you want to watch the movie without knowing how it ends, stop reading here, go rent it, watch it, come back here and let me know what you think.

"The Burrowers" lacked a good many things.  My biggest complaints about the movie concerns the monsters.  Its alright not to show the monster fully until the end of the movie, but make sure its worth seeing.  The monsters in this movie were part worm, and part human (but with the torso twisted so the legs were up like a grasshopper).  Either tell the whole back story on the monster, or don't tell any.  Telling part of the history of the monster and not finishing it is incredibly irritating.  I kid you not, the only thing that you find out about them through the flash back is that they predate humans and eat buffalo.  When the flash back ends, you find out that without buffalo (the white man's fault) they now come after another food : humans (also noted as the white man's fault).  No other explanation - mutation, alien, demon, spirit, nothing.  Towards the end you find that they liquefy their prey with some kind of acid or poison that they put in their victims and then they come back later and eat them like some kind of worm or spider.  Oh, and sunlight kills them, only nobody has figured this out even though the monsters have been around for so long.  The monsters are killed by accident when they are left staked to the ground and the sun comes up and the light shines down in the forest.

The movie feels like it drags along mercilessly.  (While looking up the running time on IMDB.com I stumbled on the fact that "The Burrowers" is also, incidentally, a seven part series online from 2007.  The movie followed in 2008.  Oh my.)  The movie itself is 96 minutes but feels lengthier.  This is due in no small part to the buildup of characters such as the military leader who is integral to the movie in the beginning, disappears for most of the action, and then comes back in the last few minutes only to hang two characters, kill one by blood loss during an unnecessary amputation and then walk away.

The ending was really confusing.  My boyfriend explained that the main character was marked for death by the Burrowers when he fell into the chest cavity of another person who was marked, and his broken fingernail allowed the poison to seep into his body from the other body.

My last complaint - not one scene that made me jump.  Even if a movie is awful, that can usually be at least one of the saving graces.  This movie offered no surprises.  But a few cut scenes of ants, which I'm not sure how that pertained to the movie.  Although there were some redeeming qualities, this movie could have been so much better.  Its a decent movie to show to someone who is terrified of scary movies, since it most likely won't scare them.  Its also a good movie to watch if you're doing something else at the time like homework or crochet.
burrowers monster monsters Movies and TV subterranean worm