If you haven’t guessed by now, I’m a big fan of Kim Paffenroth’s writing style.  My next step was to see what stories he would pick if left to his own devices.  My prayers were answered with his anthology "The World is Dead".  Paffenroth chose to divide his book into four categories : Work, Family, Love, and Life.  There are four stories in each category, excepting the last which has six stories.

I read this book in a weekend, while I was on vacation with my boyfriend.  I was up all night long with a ferocious cold and had brought "The World is Dead" in anticipation of 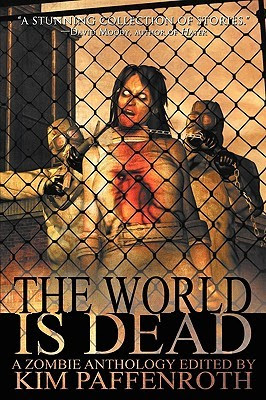 having time to read.

All the stories were really good, and at the end I wound up feeling more sad about the end of the world than terrified.  The stories dealt with life after the dead had risen, and how we as a society would adapt to the new living conditions.  Some stories described people who went insane and became murderers, others lived their lives as though nothing happened.  More than a few people found ways to creatively join their loved ones in death.

David C. Pinnt’s story “Working Man’s Burden” is set in a meat packing factory where the dead are employed in the killing, cutting, and packaging of the meat.  [This story made me think twice about my chicken finger sub dinner, that’s for sure!]  The catch is that the dead are controlled by remote, and when they’re about to go homicidal, a person in a control room is warned.  Apparently there really is no substitute for an old-fashioned workforce.

Gustavo Bondoni’s “Bridge over the Cunene” is a story in the Family category.  A village has learned that they must make a sacrifice to the dead in order to preserve the well-being of their village.  The sacrifice is usually an animal, but things go wrong one day when the sacrifice is left behind and a young mother must decide who to give to the dead: herself or her son.  [I wound up crying at the end of this story.  Don’t think you’ve guessed the ending – I guarantee whatever you guess isn’t as sad as the actual story.]

If the world in David Wellington’s “Dead Man’s Land” ever comes true, we’re all in deep trouble.  In this story, during the outbreak people took refuge in stores like WalMart and Home Depot.  The managers of these stores became the kings of a feudal kingdom.  The people who were refused shelter in these stores met one of two fates.  Either they were eaten and joined the undead horde, or they were employed as runners between the other stores.  In short, goodbye democracy and women’s rights.  Even though this story is found in the Life category, I’m not sure if its much of a life to lead.

"The World is Dead" is a good book for anyone looking to escape the gore of the usual zombie story and gain some humanity.